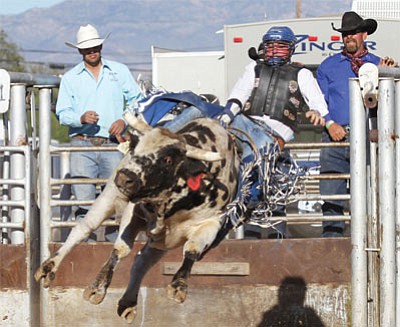 A rodeo will be part of the program when the inaugural Best of the West on Route 66 Festival opens in Kingman in September. (JC AMBERLYN/Miner)

KINGMAN - Organizers of the first Best of the West on Route 66 festival have quietly worked behind the scenes for the past few months preparing for the city's biggest weekend of the year - and what a weekend it will be.

That's too much information to jot down on the typical calendar, so just write "Best of the West" on the squares that denote Sept. 25-27 and let the anticipation rise as the days tick by.

"Festival plans are going well," said Dora Manley, who led last year's successful International Route 66 Festival and took the reins again this year with a lot of help from too many others to mention.

A $25,000 grant from the city's Tourism Development Commission to market the event has allowed the group to reach people throughout Arizona, Southern Nevada, southeastern California and New Mexico.

Manley said Jim Hinckley, the undisputed expert on all things Route 66 and perhaps the iconic highway's biggest booster, has traveled to other communities along the route pushing the event. Hinckley is the King of the Mother Road for the parade.

Kingman is mentioned in the third verse of the classic R&B song "Route 66," right between Winona and Barstow. It was written in 1946 - 20 years after planning began for the highway linking Los Angeles and Chicago and first recorded by the legendary Nat King Cole.

Route 66 was nicknamed "The Mother Road" by novelist John Steinbeck in his timeless masterpiece, "The Grapes of Wrath."

It was, in Steinbeck's words, the road to opportunity for Americans fighting their way through the Great Depression and folks in Kingman see the same possibility today as it continues to recover from the Great Recession.

While the highway's heyday ended long ago, Route 66 is making a comeback for folks with a nostalgic longing for yesteryear, and Kingman is in the perfect spot on the map to fill the need on a yearly basis.

"We're building on last year's international festival and preparing for next year while we're putting this year's together," said Manley. "We've laid a lot of groundwork for next year."

That groundwork is designed to bring visitors from other countries, where Route 66 is highly popular and is an annual vacation destination for individuals and Route 66 associations in Europe and elsewhere.

Manley said there was not sufficient time to attract foreign visitors to this year's event because, well, most people don't have the wherewithal to fly across an ocean without first planning the trip.

Manley said organizers continue to look for a host hotel to act as a sponsor.

She said the hotel would be included in all of the festival's marketing materials and "could be had by donating a couple of rooms for the bands" that have been scheduled, she said. Hotel managers are encouraged to contact Manley at (928) 279-4560.

Those bands are the popular West Coast Travelers, a classic rock band with members from Kingman and Las Vegas, and Garlin Hackney, a Kingman native and member of the Rockabilly Hall of Fame.

Hackney will host a sock hop. Both bands will play at Locomotive Park, where most of the action will take place.

The car show will likely be another huge one - more than 300 participated last year - but Manley said she doesn't expect them to commit for a few more weeks as they wait to see what the weather will be like on the big weekend.

Typically, daytime highs hover between 75 and 85 degrees in late September and monsoon season is essentially over.

Time to get some kicks on Route 66
Organizers: Route 66 Festival is ready to go
Route 66 group, Andy Devine Days partner for big event
Route 66 Festival kicks off; road will honor its saviors
Dutch couple honored with brick on Kingman's Route 66 Walk of Fame