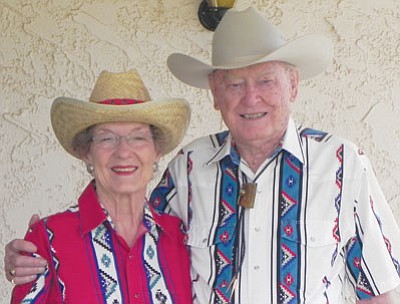 Les and Lyndal Byram are the grand marshals for the Andy Devine Days Parade scheduled for Sept. 26. (Courtesy)

EDITOR'S NOTE: Recent reports indicating Jim Hinckley will be the grand marshal for the Andy Devine Days Parade that will occur Sept. 26 as part of the Best of the West on Route 66 festival were incorrect. That honor goes to former Mayor Les Byram and his wife, Lyndal, who were named grand marshals for last year's parade, which was rained out. Hinckley, a Kingman resident and author who has published several books on the iconic highway, has been named King of the Mother Road for the three-day weekend.

KINGMAN - The city of Kingman's Parks and Recreation Department is looking for participants in this year's Andy Devine Days Parade, which is part of the Best of the West on Route 66 Festival Sept. 25-27.

Yvonne Cossio, the recreation superintendent for Parks and Recreation, said the parade will start at 10 a.m. Sept. 26 with staging taking place in the area of Beale and First streets. From there, it will head to Sixth Street and turn north and then west on Spring Street.

"The parade is still open for parade entries and (Parks and Recreation) is looking for anyone who might be interested in participating," said Cossio. Entries can consist of businesses, youth groups, musical and other entertainers, antique and restored vehicles, horse and animal groups, community organizations, public service agencies, politicians, floats and just about anything else.

"The more the merrier," said Cossio, who pointed out there is no cost to participate.

This year's grand marshals are Les and Lyndal Byram. Les, who has been a Kingman resident for 60 years, and Lyndal are retired educators who spent their careers in Kingman. They've been married for 56 years and have three sons.

He was an educator for 36 years, spending 26 of them as principal of Kingman Junior High, now known as Kingman Middle School.

Lyndal taught in Kingman schools for 25 years. After retirement she devoted her time to her church, substitute teaching, and as a volunteer at the Route 66 Museum and the Kingman Mohave County Library summer programs, the Mohave County Museum and Women Making History.

The couple also devoted their lives to a number of social, political and service organizations.

For more information on the parade, contact the Kingman Parks and Recreation Department at (928) 757-7919.