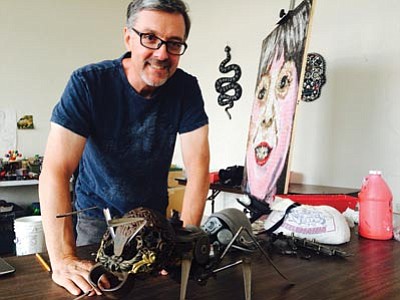 Donald Gialanella, artist-in-residence at the ArtHub in downtown Kingman, is creating a metal sculpture that will be exhibited at the upcoming Best of the West on Route 66 Festival and then donated to the Route 66 Association. (HUBBLE RAY SMITH/Miner)

KINGMAN - Don Gialanella can't pass up screws and washers lying on the ground, or loose buttons, or a plastic model airplane thrown in the trash. You never know where those pieces could fit into his artwork.

His artistic technique is to densely populate the surface of his sculptures with various objects that he either finds when he's walking around or that people give to him, like the bottle caps he received from The Cellar wine bar.

"You have to find the right piece," said Gialanella, artist-in-residence at the ArtHub in downtown Kingman. "It's like painting with metal. Half the battle is finding the material, and the other half is putting it together."

Gialanella is creating a 12-foot metal sculpture he calls "Running Hare" at Mohave Community College to be exhibited along Route 66 in conjunction with the Best of the West on Route 66 Festival Sept. 25-27. After that, it will be auctioned off to raise funds for the Route 66 Association of Kingman.

He always picks obvious names for his sculptures, like the complex attachment of metal parts to a wooden armature he calls "Ant." If anyone in the community has a better name for the rabbit sculpture, he's open to suggestions.

The genesis of Gialanella's project came from talking with people such as Scott Dunton and Jim Hinckley, who thought it would be a good idea to build a sculpture that represents Route 66.

"The original idea was more staid, and we wanted it to be more anthropomorphic, to express more motion, so I went from a sitting rabbit to a running rabbit," the artist said Wednesday during an interview at ArtHub studio. "It's about travel, moving from one point to another."

The hare is an "idealized image of speed and travel, adorable and unassuming," Gialanella said. It's a symbol of ambition, speed and virtue, and a natural inhabitant of the desert.

The sculpture is made from repurposed steel and will serve as a "touchstone" for environmental and cultural awareness, Gialanella said. By incorporating design, the artist pays homage to the history of Route 66.

The artwork will add a wonderful element to the Kingman Route 66 environment, and will become a photo opportunity for tourists and visitors, he said.

"The project is designed to help give Kingman a unique point of identity, promote tourism and give the public a unique work of art to view," Gialanella said.

Born and raised in Maplewood, N.J., Gialanella studied at The Cooper Union in New York City, receiving his bachelor's degree in fine arts. He's been an independent artist for over 20 years specializing in public art.

His works are on display in public areas in New York, Denver, Pasadena and Napa, Calif., and Norway and China. He was commissioned in 2013 to create a landmark sculpture for Lucille Packard Children's Hospital at Stanford University.

Gialanella apprenticed with Louise Bourgeois, an influential figure in modern and contemporary art. He worked as a graphics producer at ABC-TV in New York in the 1980s and received an Emmy for his work on Monday Night Football in 1990.

In 1995, he began working out of his studio in Cooperstown, N.Y., later relocating to Taos, N.M., and then to Los Angeles.

"I needed to shake the tree a bit and experience a new setting to create art, so I applied to the ArtHub studio residency program and got accepted," Gialanella said. "I love it here. It's an interesting divergence and it's been great meeting the community and interfacing with people. Art is about communicating."

His main dilemma about coming to the ArtHub was the capability of making metal sculptures in an art studio, he said. He was able to make connections with the college during an art scholarship contest at ArtHub.

Gialanella thanked Buddy May of Mohave Community College for allowing him to use the welding facility on campus, and Ken Watkins of Bulldog Scrap Metal Recycling for donating materials. Jerry Shook, a retired welder, is helping with the project and the two of them have really "bonded," Gialanella said.

He also praised Doug Angle of Angle Homes for supporting the arts. Angle invested roughly $120,000 renovating part of the Central Commercial Building into the ArtHub, building residential lofts for artists to live above their studios. ArtHub has various weekly art programs and occasional classic movies.

Gialanella, who started his three-month residency at ArtHub in June, has been working for about a week on the hare sculpture, starting with its 400-pound base. It's a big project, and he's been invited to stay an extra month to complete it by the beginning of the Best of the West festival.

"I always have the best intentions whenever I start a project, but you never know what you're going to encounter," he said. "The biggest challenge is working in the space. My studio in L.A. is set up to accommodate sculptures."

To follow the progress of Gialanella's "Running Hare" sculpture, including photos and video, go to www.DonSculpture.com.