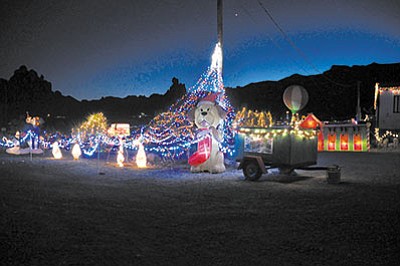 About 100 blowups, 70,000 lights and a bunch of other cool-looking holiday items are currently on display at 2225 S. Dome Road in Golden Valley. (Courtesy)

It seems just like yesterday that my wife, Chris, and I finished taking down the decorations from our 2014 Christmas display in Golden Valley, packed them up, put them into storage and thought we had a year-long breather.

We also believed we set an unbreakable record last year with 70 blowups, about 70,000 lights and a lot of other Christmas-related display items. We even had a Christmas-themed porta-potty (yes, the ones you see at construction sites for the workers to use). I even passed out candy canes throughout December to all the visitors who decided to stop by to check our Christmas display.

To top it off, more than 145 of our friends and acquaintances showed up one night prior to Christmas last year to visit with us and to check out the display. That doesn't include the hundreds of other people who just drove by to view our display.

We had a year break from decorating? All I can say is I WAS WRONG! My wife has an obsession and of course, I always seem to always fuel it.

Even before we took down the 2014 Halloween and then Thanksgiving displays (Chris decorates for just about all holidays), we were knee-deep in the 2015 Christmas display planning and preparation, and I was even in the garage periodically fixing items that got broken last year and marveling over the new decorations we had acquired. Chris purchased those after-holiday deals at stores and on the Internet.

I guess I should have realized that last year's record would go away like a stampede of cattle since I am married to Chris Marie. She is like the "Queen of Decorations" and I should never have thought something isn't going to happen when it comes to her. There's an old saying: "Expect the unexpected."

When we started attempting to figure out where all of the Christmas decorations were located in the various storage areas this year, I quickly realized the 11 by 17 metal shed she had her decorations in didn't hold everything. We had stuff we purchased since Christmas in just about every nook and cranny in the garage, our closets and other areas I didn't even know existed.

This year, we are planning on having close to 100 blowups, 70,000 lights, a bunch of other cool-looking Christmas items to display and yep, I plan on having another Christmas-themed porta-potty.

Many probably wonder why we go to such lengths to have an over-the-top Christmas display on two and a half acres. It's simple. Many of our neighbors and folks in northern Mohave County are elderly, no longer have the ability to put up decorations themselves, and live on fixed incomes. It is Chris's and my way of giving back to the community. We figure as long as we can afford it, we will have a display each year for all to enjoy.

Some of our neighbors and even complete strangers have approached us and wanted to help out with our electric bill for the period the display is up. Both Chris and I say, "No thank you." However, we have decided again this year we would have two donation boxes strategically located in our front yard - Toys For Tots and For The Luv of Paws, a no-kill animal shelter in Golden Valley.

Chris tells me she plans on having all of the Christmas blowups and various other display items up and running by the beginning of December.

People who would like to visit the display at our home located at 2225 S. Dome Road in Golden Valley can do so by turning south on Egar Road (mile marker 17) from Highway 68 and driving south for four-and-a-half miles and then turning right on Tapeats Drive (if you arrive at Shinarump Road, you've gone a half-mile too far). Head west for about one half-mile and you can't miss the display at the corner of Tapeats and Dome. According to Chris Marie, the display will be up and running for at least four hours after sundown each night and she plans on keeping it up until Jan. 2.

Don't forget that if you do decide to visit our Christmas display, it isn't mandatory, but we would appreciate it if you would bring a bag of dog or cat food to be given to For The Luv of Paws and/or a new unwrapped toy to be turned over to the Marine Corps League Detachment No. 887 and the Marines who will be passing out toys during this year's Toys For Tots program for local needy children.

Those who would like to donate toys at other drop-off locations in northern Mohave County or register their children for the Toys For Tots program to receive toys for Christmas can call (928) 718-TOYS.

Chris and I say Merry Christmas and Happy Hanukkah in advance, and hope to see you cruise by our Christmas display extravaganza.