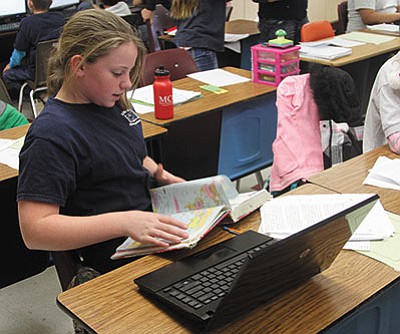 Only 34 percent of Arizona students passed their English test in the state's newest standardized assessment, according to results released Nov. 30 by the Arizona Department of Education.

Educators say the AzMERIT test data, which has a much lower rate of passing than its predecessor, the AIMS test, indicates a higher benchmark for Arizona students.

"We all knew that we had changed the bar," said Rebecca Gau, executive director of Stand for Children Arizona, an education advocacy group that has been working to reassure and provide resources to parents who are used to seeing their children score in the top quartile.

Gau said she's seen it firsthand as a mom. Her children normally scored in the "Exceeds Expectations" category, which is the top level in AIMS, but AzMERIT saw them drop down a category to "Proficient."

"I had to remind myself that the proficient category does mean that your child is on track to enter English 101 or Math 101 without remediation," she said. "So proficient is a good thing. We're just used to seeing our kids pegged in that highest category."

Statewide, an average of 65 percent of Arizona students failed to pass the math exam.

"The results as a whole tell us that we have a long way to go," said Charles Tack, a spokesman for Superintendent of Public Instruction Diane Douglas.

Although Douglas has voiced disapproval of AzMERIT and its "hasty" five-month adoption process, Tack said the new test provides a more realistic picture of Arizona students than AIMS did.

AzMERIT was created in part to accompany the Arizona College and Career Ready Standards, otherwise known as Arizona's version of Common Core, which the Arizona State Board of Education adopted in 2010. Although the state board voted recently to cut ties with Common Core and is reviewing educational standards, Common Core remains in place for now.

Gau said Common Core standards may have influenced how different age levels scored on the new test. Data from the assessment showed third-grade students passing the English test at 40 percent and 11th-graders passing their exam at 30 percent. There was a 12 percentage point disparity in the math test.

As Gau puts it, the older students have had more time to be accustomed to AIMS standard, while the younger students are starting out fresh.

"So it makes sense that the students who have been in school for 10 or 12 years haven't been exposed to that level of rigor quite as long, whereas the younger kids have," she said.

Another noteworthy trend was the low scores of students in rural counties.

Mohave County did not fall into that trend for rural counties. The county as a whole scored among the top counties in the state, with 30 percent of students passing English and 33 percent passing math.

Gau said that disparity can be attributed to the fact that most Arizona students live in Maricopa, where high-performing districts such as Mesa Unified and Phoenix Union work to implement the standards.

"When you look at the rest of the state, we have a lot of low-income, rural areas, and they have struggled with all sorts of resource issues and poverty issues that mean they're sort of entering school further behind, and it takes more for them to catch up," she said. "And unfortunately, we see that in data like this."

Tack, who visited Apache County during Diane Douglas' "We Are Listening" and "We Heard You" tours, said the AzMERIT results confirmed what Douglas already knew: For rural schools, "it's a different ballgame."

Tack said those regions have tight resources and few incentives for good teachers.

"It can be very tough to convince a teacher to stay in Arizona at all when the salaries are not competitive, particularly if you're in an area where a teacher can go across the border to another state and receive a higher salary," he said.

Rep. Jeff Dial, R-Chandler, said more resources need to go directly into those classrooms, and he pointed to Proposition 123, Gov. Doug Ducey's land trust proposal. Arizonans will vote on the proposition in May.

"It's crucial to get that in there," Dial said.

Gau says AzMERIT results are a positive step after "five years of work on alignment."

The difference in scores between Kingman Unified School District and Kingman Academy of Learning were night and day, compared to the scores produced statewide.

"We strive, especially in the lower grades where the ability to read and do math are the most important things, to find out what each student needs to be successful," said Susan Chan, the administrator for Kingman Academy of Learning.

"With the exception of a couple of grades and subjects, we are very pleased with our results.

"Anytime you take a new test, you don't know what to expect. It is not AIMS. Stakes are much higher. We've been working and incorporating standards for several years in anticipation," said Chan.

For the grade levels that didn't do so well, Chan equated taking the AZMerit last year as "asking someone that has played freshman level sports to go and play varsity."

"I can guarantee you the tests we took five weeks ago will have better results, just because of a few changes we made," said Chan.

The district named the new test and new expectations as heavy influences, and also stressed the importance of looking at student subgroups in the coming month.

"Looking at our scores, it is absolutely a new test with new expectations. They are not comparable to the AIMS test at the least," said Sarka White, director of assessment and professional development at Kingman Unified School District.

"The one thing to keep in mind is this is a baseline. The bar that was set for AZMerit is drastically different, and all schools have areas of improvement," said White.

The older kids struggled, according to White, because of a shift in expectations for students taking the new test.

Children in younger grades have started their education careers with the current standards in place, while the older students grew up with a different set of standards.

One isn't necessarily better than the other, but they do have different end points as students progress through elementary school and high school.

Older students are held to expectations that are based on the idea that they've been learning the current set of standards all along.

The district is working on deriving subgroup test scores to see which programs did well.

White expects those numbers to be available at the beginning of the New Year.

Both districts will be getting fall AZMerit test scores later this month.

James Anderson with the Cronkite News Service contributed to this article.

Results of AzMerit reveal big gaps among high schools
Arizona fourth- and eighth-graders trail U.S. on math, reading scores
Does your school meet the grade?
Kingman Academy: An even dozen earn perfect AzMERIT scores
AZMerit results are in: KAOL improves, KUSD says it still has ‘work to do’