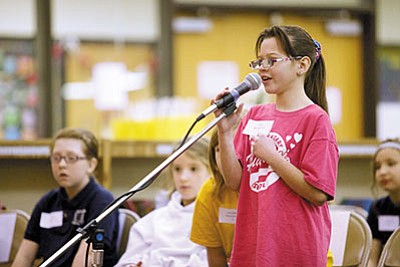 This story will be updated with more spelling bee winners.

KINGMAN - Thirty-seven students competed at the Hualapai Elementary School spelling bee last Friday in the Hualapai School library. The bee is open to third, fourth and fifth graders and serves as a qualifier for the Mohave County competition.

This year's winner was a fifth grader, Christian Aquino. The second place champion was a third grader, Sean Shiell.

"It was a very nice year," said Loni Keller, spelling bee coordinator at Hualapai Elementary School. "What was exciting about it was that the third graders were invited to participate. They have for the past several years."

Under official spelling bee rules, the competitions after the local school level can only accommodate fourth and fifth graders. Because Shiell cannot compete at the county level, a run-off for a school alternate came down to a duel of rounds between Ben Connell, a fourth grader, and Adalin Schmidt, a fifth grader.

Schmidt eventually came out on top, and will be joining Aquino and others at the county spelling bee held at the Mohave County Board of Supervisors auditorium at 7 p.m. Jan. 22. Both bees are part of the Scripps National Spelling Bee program, with students getting the chance to qualify for the national competition in May.