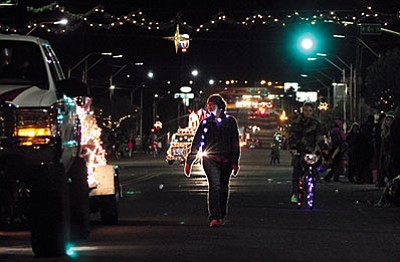 JC AMBERLYN/Miner<BR> A scene from this year’s Very Merry Parade of Lights organized by the Route 66 Trailblazers Rotaract Club and held downtown on Dec. 5

KINGMAN - Everybody loves a parade, but few want to organize it and raise funding.

It's going to take a lot more than a handful of volunteers to bring the Veterans Day Parade back to Beale Street next year, parade chairman Dave Stafford said.

Kingman Veterans Day Parade Committee spent more than $3,000 to hold the parade on Nov. 7, including $1,600 for barricades alone and about $500 for insurance, which was a "bargain," Stafford said.

The committee met Monday at the Elks Lodge to discuss what was good about the parade and what needs to be improved.

The parade had been held on Northern Avenue for 11 years, initially organized by VFW Post 10386 and then by the Jerry Ambrose Veterans Council. VFW hosted a party after the parade with live music, food and drinks, but it wasn't kid-friendly.

By moving the parade downtown, it could end at Locomotive Park where there would be booths and children's games to make it more of a family event, Stafford figured.

Unfortunately, the booths weren't set up in time, and there weren't any volunteers to staff the games. Stafford found himself running around after the parade trying to set up booths that probably should have been in place the night before.

"We hope to make it better, but we need more people, more volunteers to set up booths and line up the parade," Stafford said. "We need folks who want to step forward and want to be part of the parade. We can't have them bailing at the last minute."

Stafford said he ended up with about six people to run the parade, and he needed at least 15.

The Very Merry Parade of Lights, held Dec. 5 on Beale Street, is in the same boat, losing money each year and on the ropes for a sponsor.

"It's something that's really beneficial to the community," said Brie Bunn, vice president of the Route 66 Trailblazers Rotaract Club. "People look forward to it every year."

The biggest challenge, she said, is that Rotaract has only sponsored the parade for two years, taking over after it was abandoned by the Downtown Merchants Association. The club picked it up in September, which didn't allow much time to publicize and organize the parade.

"The other challenge is our group is very small, six of us, and it's a challenging time of the year as well," Bunn said.

The major expense is $1,000 for the city to close roads, put up signage, plan where the floats are going and tow away cars that are left on the street at parade time. The club is "very lucky" to have off-duty officers from Kingman Police Department volunteer for traffic control, Bunn added.

Entry fee for the parade is $40 and there were about 35 floats this year.

It's not a fundraiser for Rotaract, Bunn said.

The parade will go on next year, Bunn promised, though she wasn't sure who would sponsor it.

"It really depends. There's a rumor the Downtown Merchants reformed. Traditionally, it's been their event. It seems a good fit for them," Bunn said.

The Veterans Day Parade drew 64 entries, about half the number that participated in the parade when it was held on Northern Avenue, and many of them came in three or four days before the event.

Linda Stewart, who rode in the parade with the Patriot Guard Riders, said the turnout of spectators was much higher when it was on Northern.

"From start to end, people were lined up. I guess maybe parking and sitting along the street was easier," she said. "This year, there were more people in the parade than on the street. Of course the weather ... it was cold and windy that day."

There was a mix-up about where entrants were supposed to line up and where they would finish.

The staging area was on Oak Street, between Fourth and Sixth streets, but Kevin Nowicki said he never got that information.

"I was pulling a 40-foot trailer and didn't know where to go," he said.

Terry Flanagan, commandant of the Marine Corps League, said participants in the Veterans Day Parade want to be downtown, but "somebody has got to get their (act) together."

People didn't know where to check in or which direction to come in with their trailers, he said.

Also, organizers should work on making the Veterans Day Parade the best in Mohave County and forget about the park event. After a couple years of solid success, then ask people in the parade if they want to follow up with family activities, Flanagan suggested.

Stafford said he heard a few "grumblers" about the parade not being held on Northern, but he still feels it's better to have it on Beale Street.

It helps downtown businesses and the parade committee did get donations from some of those businesses.

"Plus having an after-event in the park ... I really feel strongly that we need to do that. We need family time," Stafford said.