In business, speed matters; but so do safety and the rules 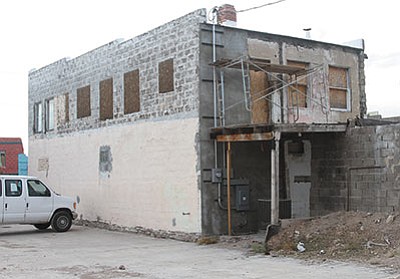 In downtown Kingman, where buildings are often old, some are frustrated with the pace of getting changes approved. (JC AMBERLYN/Miner)

Jim McErlean hears it every day as a building official for the city of Kingman, from business owners and general contractors and real estate agents representing clients.

They all want to get their building done as quickly as possible and for the least amount of capital investment.

McErlean understands that, but it's still his job to make sure all new construction and renovation complies with building codes for structural integrity and safety, and that the work is done by certified architects, engineers and contractors. There are also Americans With Disabilities Act requirements.

That makes him a pain in the rear for some people."People just move in and get a business license. We come in and inspect and say, You need to do this, this and this,'" McErlean said during an interview at Kingman's Development Services department.

"But unfortunately, people found out after they invested time and money that they're not in compliance and that's sad."

His recommendation: Come to the building department first.

Bring plans to the city and have a conversation with building officials about what you want to accomplish, McErlean advised. They'll even go to the property site at no charge.

"We're all for refurbishing downtown and doing what you've got to do and we're also for working with you," the building official said. "We don't want to hold up a project."

He had to jackhammer through the concrete kitchen floor to put in a vent for the septic system. He sunk $400,000 into the restaurant, including the kitchen remodel and new kitchen equipment.

"I got spoiled in Lake Havasu City," said Lin, who owns two restaurants there. "Kingman is different city. Bullhead (City) even worse. They try to make everything perfect."

It would have been nice if someone had told Lin about the problems in advance.

"Later on I have more problems," he said.

Angela Patterson felt like the city bent over backward to help her open Beale Street Brews coffee shop in the historic Central Commercial Building in 2007.

The process was easy, she said. People asked if she had any grievances with the city, any requirements the city might have imposed that would delay her business opening, and she answered honestly that she had no complaints.

"There was a connection or common goal, even shared excitement in getting the business open," Patterson said. "The building department was totally on board with everything I submitted and there was no architect or engineer involved."

That changed when her lease expired in November and she decided to relocate her business to 510 E. Beale St., a vacant building that was a former bank and real estate office.

Patterson had to hire an architect to submit plans for renovation, an additional cost of about $4,000. The building's use is changing and renovations include tearing out walls. A second exit is needed when occupancy exceeds 50.

The declared occupancy shown on Beale Street Brews' plan is calculated at 49, and the plan says the dining room has fixed seating.

But McErlean said nothing in the plan indicates that the seating is fixed as it would be at a McDonald's, for example.

The International Building Code requires occupant load to be calculated at 15 square feet per person, which would be about 90 people for 1,353 square feet of dining room area at Beale Street Brews.

Combined with nine other occupants and one for the piano, the occupant load for the building is 100. Occupant loads of 100 or more require fire sprinklers and fire alarms.

The city also wanted Patterson to supply a menu for consideration of a grease interceptor or trap, as well as a list of equipment specifications and installation details, particularly for the coffee roaster vent.

Patterson said she changed use from a crafts store to a coffee shop at Central Commercial Building in less than four months. There was inadequate electric in the shop and nothing in the art gallery, and the only plumbing was in a tiny bathroom.

A licensed contractor did major remodeling, and no architectural plans were required. Occupancy was 76 and she didn't need a second exit.

The Arizona Board of Technical Registration sent a letter to the city of Kingman in December 2014 about "erroneous advice" given by plan reviewers in some jurisdictions on the interpretation of state law determining when a commercial project requires a registrant, or certified architect, and when it's exempt.

Some things can be done without an architect - minor renovations such as new carpet and paint or adding a sink to a kitchen that already has plumbing in place, McErlean said.

Swiss real estate developer Werner Fleischmann bought the historic Brunswick Hotel, completely gutted the west side and reconstructed it as an ice cream parlor and deli. He built two guest rooms in what was once a garage.

Obviously, due to their age, a lot of existing downtown buildings don't meet standards established by the Americans With Disabilities Act.

That's not a problem if there is no change of use, McErlean noted.

However, if you take the same space and remodel it, then 20 percent of that cost has to go toward ADA standards.

"They seem to be more concerned with code violations than the economic development of downtown Kingman," said Tim Schritter, owner of Black Bridge Brewery.

He was given a 15-day notice just before Thanksgiving for setting up shipping containers in back of the brewery, something that wasn't an issue when he started the business two years ago.

Schritter said they've been retrofitted with refrigeration and serve as walk-in cooler units.

He also built an outdoor stage for live entertainment, and now he's being told that he doesn't have proper egress for ADA standards.

Schritter said he has a handicapped patron who came to the brewery's Halloween costume party with his wheelchair decorated as a tank and won first prize.

"Somehow or another, he was able to ingress and egress and use the bathroom with no problem at all," he said. "Now I need to spend $100,000 to come in compliance with ADA. This is the problem with government. They come up with a cookie-cutter solution and it doesn't fit everything. They don't understand or care about the blood and sweat I put in. All they know is what the book says."

Yvonne Woytovich, president and chief executive officer of the Kingman Area Chamber of Commerce, said these type of situations demonstrate the need for an organized consortium that represents the interests of downtown business owners.

"We are seeing a consortium starting to take shape here in Kingman, and I believe that will continue to improve the downtown business climate," she said.