The kids won: Another successful Toys for Tots drive winds down 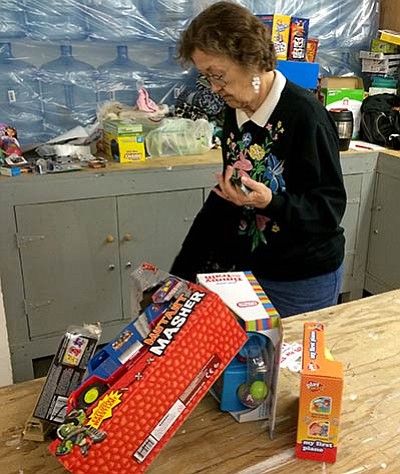 KINGMAN - In a nondescript building behind the car wash on Northern Avenue, Toys for Tots coordinator Casey Farrell is constantly on the phone talking to divorced mothers and jobless fathers who can't afford Christmas for their kids.

Toys donated by Girl Scout Troop 48 have been packed up and moved out, and volunteers are busy filling bags for some 3,445 children and counting who qualify for the program, up slightly from last year.

"We couldn't do it without the support of the community," said Farrell, who took over as Toys for Tots coordinator last year from Don Olin.

Toys for Tots, a program started by the U.S. Marine Corps in 1947, set up more than 60 drop-boxes for toys throughout Mohave County, including banks, restaurants, doctor's offices and businesses at Kingman Airport and Industrial Park.

Kingman Golden Valley Association of Realtors collected 245 toys, including bicycles and scooters, and presented a $6,170 check to Toys for Tots.

"The Realtors do a phenomenal job. They're one of our largest contributors," Farrell said. She noted that 97 cents of every dollar goes towards purchasing toys and the remainder pays administrative costs.

Mohave County Treasurer's Office and Recorder's Office competed to see who could collect the most toys, with a pizza party on the line, said Sue Ann Mello, administrative assistant to the treasurer. Together, the offices collected 269 toys.

About 1,000 families will be called through Christmas Eve when their toys have been packaged and ready for pickup.

Farrell screens callers by asking them how many children they have and what ages, what is their household income, do they receive food stamps or cash assistance, and do they have custody of the kids.

They must present photo identification and sign a form when they come in to pick up their toys.

"Honestly, if it wasn't for Toys for Tots, I'd be crying my eyes out right now," said Kaneasa Hunsaker, who picked up toys for four children. "I lost my job due to having a baby, so I'm struggling. It's hard out there."

That's why Jersey Latawiec, a retired Marine and Vietnam War veteran, volunteers for Toys for Tots. He's "been there, done that."

Latawiec was working in the back room, bagging appropriate toys for boys and girls by age, trying to figure out what a 2-year-old might like and what a 6-year-old would want.

"That's tough," he said. "It's a real good feeling. A lot of kids out there are unfortunate that their parents don't have the means."

Melissa Holland, mother of a 20-month-old daughter and 4-year-old son, said she was late in signing up for Toys for Tots and the staff was "really nice" in accepting her application. She's going through a divorce and is not receiving child support.

"My kids are going to be really happy at Christmas," Holland said. "This year is really tough. All I could afford is one present apiece. This year they're at that age and really enjoying Christmas."

Farrell said she wouldn't know if there are enough toys to go around until all the boxes are picked up, but so far it's down. The Toys for Tots campaign ended Dec. 18, and donations often pile up in the last couple of days, she said.

Volunteer Wanda Hull remembers taking toys out of bags last year and redistributing them when there appeared to be a shortage, then having to put them back as more toys came in at the last minute.

She shows up early to help Farrell unload toys.

"I get up and have some time to myself and then rush down here and help Casey," Hull said. "I work until four o'clock and go home and if the wind isn't bad, I get in my spa for physical therapy. Otherwise I would never last down here."

Farrell said she has about a dozen volunteers who help with the Toys for Tots program, including several retired Marines.

Over its lifespan, the Marine Toys for Tots program has distributed more than 494 million toys to 230 million children in need.