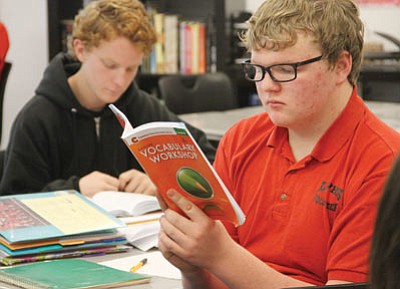 KINGMAN - With the recent buzz about the Kingman Unified School District's upcoming new STEM academy at Kingman High School, it's not surprising to local educators to hear rumors swirling about the imminent demise of a similar program at Lee Williams High School.

LWHS Principal Gretchen Dorner has heard those rumors about the Cambridge International Program, which began at LWHS the start of the 2012-2013 school year. And she knows better than to believe them, especially since there are 205 students currently participating at LWHS.

"Cambridge is alive and well here, and I'm so excited about what we're doing and where we're headed," said Dorner. "I love the Cambridge program and wouldn't change a thing about it. We have a lot of staff and parents who are committed to it. Cambridge is here to stay."

The Cambridge program is Kingman's implementation of State Sen. Rich Crandall's 2011 "Move on When Ready" legislation. It is designed to offer a rigorous and relevant curriculum that earns participants a Grand Canyon High School diploma at the end of their sophomore year.

At that point, students can either begin attending classes at a local community college or remain in high school for another two years, taking advanced Cambridge courses and qualifying for an honors diploma. Cambridge involves traditional core classes, such as world history, English and mathematics. KUSD was one of the first districts in Arizona to implement it.

Madison Ott, a 16-year-old LWHS junior, qualified for the Grand Canyon High School diploma but decided to remain in high school so she could get an honors diploma and graduate with her friends. Ott is hoping to pursue pre-med studies at Stanford University or the University of California after graduation.

"Cambridge is very challenging, but I love it and I'm up for it," said Ott. "There are many more hours of homework, and we use more critical thinking and analysis skills. It's going to help me do better in college. I truly believe in the program and think it has so much to offer the students."

Conner Camacho, a 16-year-old sophomore at LWHS, agreed with Ott. Camacho was one of two students nationally who received an A-star distinction - the other was Braden Spencer, also a student at LWHS. Camacho is hoping to study astrophysics at Massachusetts Institute of Technology after he graduates.

"I entered Cambridge because I wanted to challenge myself and take the best classes so the colleges I'm interested in will look at me favorably," said Camacho. "Not only do you look good because of Cambridge classes, but you learn in a positive way that prepares you for the future."

On the other hand, STEM Academy will begin this fall at KHS and focus on the growing array of STEM careers that spotlight the fields of science, technology, engineering and mathematics. KUSD describes the academy as a unique approach to teaching and learning that fosters creativity, innovative thinking skills and hands-on experience.

Students at KHS who choose to pursue STEM majors this fall can participate in the biomedical science academy, which offers pathways to medical assistant, health information technician and nursing. They also can select the program's engineering and drafting academy, which focuses on engineering. KHS is partnering with the University of Arizona in Tucson to offer molecular cellular biology classes needed for a biomedical degree.

The foundation for Cambridge preparation comes at the middle school level, said Dana Kunert, coordinator of the Cambridge program at both middle schools,where students get their first taste of courses that are more challenging to them. Kunert said Cambridge is a school within a school, with a rigorous curriculum that centers on global economy.

All participating middle school classes are given sets of laptop computers and iPads, and Apple televisions will be coming soon. Students participate in regular team-building activities to promote collaboration and cooperation skills. And they go on field trips each semester, including to the Atomic Testing Museum, Challenger Space Center and Children's Discovery Museum.

"Every year since we started, we survey the students and find they are enjoying the challenge and being with like-minded students," said Kunert. "They want to go deeper in depth in their learning, they like doing the research and they enjoy thinking independently. And we want to guide them to have the skills to think for themselves."

In fact, the first group of students at WCMS who participated in Cambridge during the entire three years of middle school will be moving to the high school level in the fall. Isaiah Ward, assistant principal at WCMS who taught Cambridge the first year it opened there, said he has seen those students grow and expand because of it.

"They didn't understand the depth of it, and we had to build on that," said Ward. "That first class had no idea of the rigor involved and the need to think outside the box. They were used to getting information and regurgitating it. I think this group will be more confident and prepared for the challenge in high school because of their time here."

WCMS Principal Tonia Cobanovich agreed, noting "They have lots of questions but are excited to move on to high school. They have lots of curiosity about what awaits them in Cambridge. Once they have spent time here, they start to realize how we've prepared them and that they'll be at an advantage because of what they've done."

As for the threat of competition between the two programs, the educators say that's not a problem. Both have different focuses, objectives and outcomes, and the students they attract will be looking for specific qualities and results.

"As opposed to competition, we look at these two programs as choices," said Kunert. "Cambridge is associated with a leading university and the information given to students is continually updated. STEM is more focused on the growing skills needed to land high-tech, high-demand jobs. They're two very different programs and the choice for parents depends on their goals for their child."