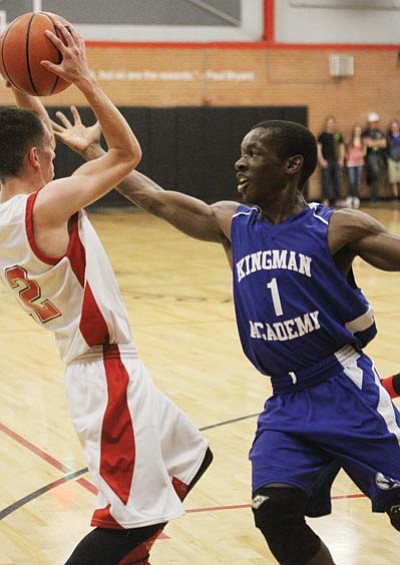 KINGMAN - The difference may have been experience. The Kingman Academy Tigers have seniors, and Lee Williams doesn't.

It was senior Henry Chinyere who sank two clutch free throws with 27 seconds left to make it a two-possession game for the Tigers as they escaped Doug Brown Gymnasium with a 50-44 Division III, Section II win Friday at LWHS.

Chinyere said he didn't feel much tension toeing the line despite the noise level from a capacity-filled gym with the Academy (16-2, 8-1) clinging to a 46-44 lead.

"State last year prepared us for games like this," the point guard said. "This game was a lot like a state game."

Chinyere finished with 13 points, five assists, five steals and only one turnover. He had a chance 13 seconds earlier to ice the game with the Tigers up by three, but he missed the front end of a 1-and-1. That miss didn't deter him when he got his second chance.

"When I miss shots, it leaves my mind quickly," he said. "Whether it's a big shot or a small shot."

"We can't go six, seven minutes without scoring," said LWHS boys basketball coach Ray Smith. "The Academy executed well. They did a good job of moving the ball on us and they shot well."

The Volunteers stepped up their defense in the third quarter, limiting the Tigers to 35 percent shooting for the game, and got the lead down to three, 38-35. The Academy also put Lee Williams in the bonus early, being whistled for seven fouls to the Vols' one in the quarter.

"It was a hard, competitive battle," said KAHS boys basketball coach Bryant Morrison. "I love this atmosphere. That's why this is good for Kingman."

"We wish the Academy good luck in the playoffs," Smith said. "We hope they represent Kingman well by going far."

The Tigers open postseason play in the Section II semifinals against Yuma Catholic Wednesday at Estrella Foothills High in Goodyear. Estrella and Wickenburg meet in the other semifinal.