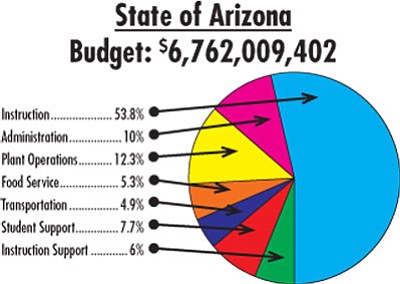 KINGMAN - Local school administrators are scratching their heads about the possibility of being required by the state to shift 5 percent of their already-strapped support-service funds into classroom funds.

Roger Jacks, superintendent of the Kingman Unified School District, and Susan Chan, district administrator of Kingman Academy of Learning, both said their budgets are so tight already it will be difficult fulfilling the state's proposed mandate.

But they're definitely willing to try.

"If it has to be, then we'll do it," said Chan, whose charter district encompasses four schools and 1,440 students. "I want to provide whatever is needed in our classrooms to get the job done.

"If our percentages are not what the state wants, then we'll have to get them there."

Arizona Gov. Doug Ducey, who took office in January, announced a classrooms-first initiative in his first State of the State address that would shift state spending from support to actual classroom teaching. Ducey has created a team to look at the state's school funding formulas to identify ways to get more money into the classroom.

Ducey recommended a 5 percent reduction in non-classroom spending for district schools and a 3.5 percent reduction to charter additional assistance. The goals of the reductions are to reduce the size of school administration and re-focus the schools on students and teachers.

Chan, whose district is solely funded by the state, said she is pleased with KAOL's emphasis on classroom funding and locating the money to pay for books and supplies. But it's almost impossible to cut support services because of the required ongoing reporting of data to the state and federal government.

For instance, the charter district collects civil rights data on students every other year for the federal government. Also, as part of its Student-Teacher-Course-Connection, the district compiles information three times a year for the state on where students and their teachers are located at all times.

And that's just a few of the required reports.

Jacks has experienced the same problems in his district, which has about 6,900 students in 12 schools. Jacks pointed out the district's positive efficiency rating on the most recent report of school district spending by the Arizona Office of the Auditor General. The report covered 2013 and was presented to the Legislature in February 2014.

"One of our measuring sticks is the auditor general's report, which assesses every school district," said Jacks. "In it, KUSD's administrative costs were low, and we got kudos for efficiency on our food service program and our transportation costs. We're doing a good job in support services and it's going to be hard to cut there."

According to the report, Kingman Unified School District had 6,674 students enrolled in 12 schools in 2013. It noted total spending per pupil had decreased by 5 percent over the past five years, and classroom spending decreased from 55.2 to 50.5 percent. The budget in 2013 was about $48.2 million.

Overall, the report noted, spending on plant operations increased substantially in KUSD and the cost of instruction support increased, while spending on student support decreased slightly. Spending on other non-classroom areas varied year to year.

The district spent 10.2 percent on administration, 13.5 percent on plant operations, 5 percent on food service, 6.9 percent on transportation, 8.7 percent on student support and 5.2 on instruction support. The district's financial stress level is low, according to the report, which assesses its overspending, savings and financial control status.

"We're proud of the fact that we're managing our dollars quite well," said Jacks. "We're pretty lean already, but we'll follow the governor's directive and find a way."

On the state level, the auditor general's report also is used annually to determine the health of Arizona's educational spending. According to the report, total spending per pupil in Arizona decreased by 4 percent from 2008 to 2013, from $7,813 to $7,496.

The state spent about $3,500 less per pupil than the national average of $10,658 per pupil in 2011, the latest figure available. Also, spending in Arizona classrooms decreased from 57.3 to 53.8 percent during that time.

Each year since 2004, Arizona school districts have decreased the percentage of their resources they allocated to the classroom, the report noted. At the same time, the percentages of non-classroom dollars allocated to administration, plant operations, food service, transportation, student support and instruction support have all increased.

A report released in October by The Center on Budget and Policy Priorities echoed the auditor general's report. It noted most states saw a drop in per-student spending from the start of the recession to the current fiscal year, but Arizona was one of the few above 15 percent.

Arizona trailed only Oklahoma, at 23.5 percent, and Alabama's 17.8 percent drop. Advocates said the impact of the cuts could be seen across the state in larger class sizes, teacher shortages and what one called the "unthinkable" elimination in 2010 of full-day kindergarten.

'I can't afford to teach'

Andrew Morrill, president of the Arizona Education Association, said the underfunding of schools was happening in the state long before the recession.

"We have over 500 teaching positions across the state that are not filled," Morrill said. "We are seeing more and more teachers at the start of the year saying, 'I can't afford to teach anymore.'"

Chris Kotterman, director of governmental relations at the Arizona Department of Education, said the effects of education cuts are being felt in districts across the state.

"This is a statewide problem that affects every school," said Kotterman. "Everybody shares this equally."

Cronkite News contributed to this article.