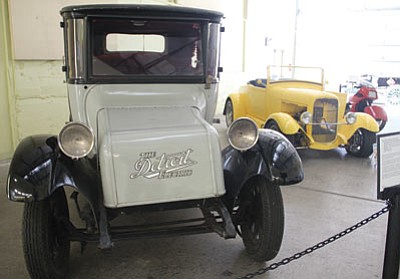 A Detroit Electric Model 60 is among the electric vehicles on display. The line was manufactured from 1907 to 1938. This is a 1930 model. (JC AMBERLYN/Miner)

KINGMAN - The International Route 66 Festival last August brought plenty of attractions to Kingman for a weekend, and one of them has found a home at the Powerhouse Visitor Center for the foreseeable future.

Eleven electric cars are on loan to the Visitor Center from the Route 66 Historic Electric Vehicle Foundation, which brought the cars to Kingman in August for the festival.

Since then they have been on display in the back room of the Powerhouse for visitors to see. Some of the vehicles on display include a prototype Bombardier NEV, the Electric Shopper Model FG-75, the Kawashocki electric motorcycle, and a Model "R" Trident.

"We are seeing people from all over the world signing into the guestbook at the Historic Electric Vehicle Display," said Josh Noble, president of the Powerhouse Visitor Center.

Noble estimates the cars will be there for at least the next 18 months, possibly longer.

"The city has been great. We've been really well received. Our plan is to have it as an ongoing museum," said Roderick Widle, executive director and founder of the foundation.

The foundation just acquired a 1914 Custer Chair Car for its collection and will have the vehicle on display in the near future. The car was invented by Levitt Luzern Custer, an entrepreneur and inventor who was a close associate with Wilbur Wright.

"Custer had worked with the Wrights and was an accomplished balloonist and aviator in his own right," said Larry Fisher, one of the curators for the foundation.

The car was created for seniors but eventually became a mobility solution for wounded soldiers returning home from World War I.

For more information on the cars in the display and future cars coming, visit the foundation's website at www.hevf.org.

If you want to see one of them for yourself, visit the Powerhouse Visitor Center located at 120 W. Andy Devine Ave. in downtown Kingman.