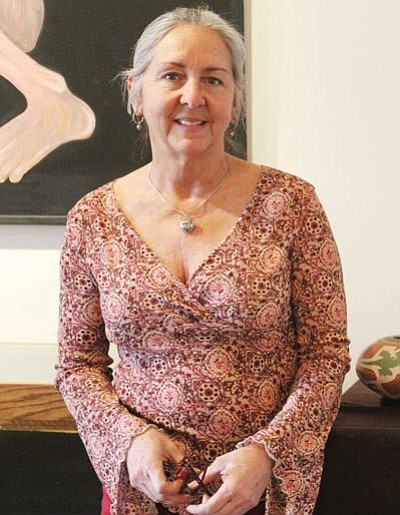 KINGMAN - Angela Patterson would like to see more downtown retail business to create the kind of foot traffic that drives customers to her Beale Street Brews coffee shop and art gallery.

Patterson opened Beale Street Brews at 418 E. Beale St. in the Central Commercial Building nearly eight years ago and has witnessed a slight uptick in economic activity in the once-thriving downtown business district that's been beaten down over the years.

She sees a ton of potential in the quaintness of older buildings that have been become dilapidated eyesores.

"The vision I had for downtown Kingman doesn't differ from the basic downtown of any town," Patterson said. "You go into Flagstaff or Williams, they're turning into a souvenir hodge-podge. You see the same things. I hope that doesn't happen to downtown Kingman. Diversity is good."

Patterson was happy to learn that an art supply store is taking space vacated by the bead store on Fourth Street, though she'd still like to have a bead store in the area.

"We need to educate people who've lived here for years and who don't even know we're down here," the coffee shop owner added. "If they don't like Kingman growing bigger, then come downtown. You get the small-town atmosphere."

Some buildings downtown are in such disrepair and out of date, the cost of renovation far exceeds the cost of razing them and rebuilding from the ground up.

Werner Fleischmann, who owns Hotel Brunswick, Beale Celebrations and several small properties downtown, said some areas should be torn down.

"Fifth (Street) to Third is okay," the Swiss investor said. "There, we should find a way to remake it. If you go from Third to First, this is a disaster. Coming in from I-40 to Beale, it looks bad. You have the school (Lee Williams High School) and Locomotive Park, and from then on it's bad."

Scott Landers, Kingman native and real estate broker, totally disagrees with demolishing old buildings. There's history involved with those buildings, and there's got to be a way to give them a fresh look and still keep that feeling of nostalgia, he said.

"I would never want to see that torn down, not much of it," Landers said. "I hope they don't build anything with a modern, contemporary look that stood out."

The broker has a 10,800-square-foot building for sale at 309 E. Beale St. for $240,000. It can be partitioned for multiple purposes, perhaps a 3,000-square-foot restaurant and a concert venue. It could be used as a meeting hall, a warehouse with office, retail, bar or tavern.

"I see a lot of other cities criticize their downtown," Landers said. "People here are still down on it (Kingman), but I think there's so much potential down there. It's classic. The problem is no one's willing to take a risk on downtown."

City Manager John Dougherty said the city wants to be more lenient on building codes, not when it comes to public safety issues, but other obstacles that have hindered property owners in refurbishing their buildings.

"That's the directive I got from the (city) council. Help people downtown. We don't want vacancy," he said.

The most common complaint he hears from property owners is meeting restroom requirements for the Americans with Disabilities Act, or ADA.

"We're working with owners on unisex handicapped bathrooms," Dougherty said. "They don't need to have two. It's not all black and white. There's some grey in there. I went down and talked to them about ADA. They don't have an entrance in the front, but they do in the back. According to the book, that's acceptable for 2010 ADA standards for accessible design."

Patterson of Beale Street Brews said she would hate to see any teardowns.

"I don't know what the answer is," she said. "Trying to get property owners on board with any of this seems to be a struggle. A lot of people like to blame the city leaders, but their hands are tied unless the property owners are on board too and a lot of them aren't."

Downtown pioneer moving to new, larger location
Beale Street has a reason to celebrate
In business, speed matters; but so do safety and the rules
Made in Kingman: Coffee shop owner spills the beans on her roasting methods
Made in Kingman: Brewery adds to downtown offerings