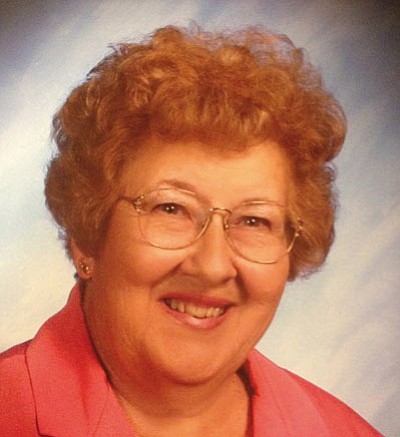 Bette loved music. In high school she sang in the chorus for three years. She played the baritone trombone or French horn. When they marched in parades, she was the head drum major who led the band. During the game intermissions the majorettes performed.

She married Fred Beeman on June 9, 1947, on her return to Winner, S.D. They left immediately for Rapid City, S.D., where Fred re-enrolled in the School of Mines and she attended National Business School. In Rapid City, she started as bookkeeper at Adel's Jewelry Store for one year. Then she moved onto First National Bank in the installment loan department as cashier where she enjoyed her work.

They moved to Belle Fourche, S.D., in 1954, and she was social service director at the hospital and nursing home. Here she started a very successful beauty and barber shop where the patients could come for shampoos, perms and haircuts done by the local beauty operators and barbers.

Bette and Fred had two girls, Linda and Susan, who were a delight to the parents. They all became wonderful campers. Linda, the eldest, adapted to camping immediately, and Susan, at 18 months, enjoyed the out of doors, even in the tent.

Bette belonged to the Girl Scouts for 75 years, beginning when she was 13 years old.

In 1965, after being out of school for many years, she decided to go back to college at Black Hills State College in Spearfish, S.D. She graduated in 3 1/2 years, and was offered and accepted a job as department head of the fourth grade. She graduated with a B.A. in elementary and secondary school in 1969. In 1975, she received her master's in education at Spearfish, S.D. In 1977, she received her MSL from Northern Arizona University in Flagstaff.

Bette and Fred moved to Kingman in 1974. She taught school at La Senita for two years and was librarian for three years.

She was member of Beta Sigma Phi for 55 years, was president several times and finished all the degrees; Delta Kappa; Epsilon Sigma Alpha; state president when living in South Dakota. She belonged to the Extension Club Morning Glories; AAUW; Who's Who in American Women in 1980; member of the VFW No. 3516; Kingman Republican Women; member of Grace Lutheran Church; Retired Kingman Teachers. She was recipient of the year for Religious Women in 2000. She served in many capacities in church and worked for a better community wherever she lived. She did the birthday cards for her church for 25 years; the memorial fund for 22 years; the Mary Martha Circle; and various other committees.

She was preceded in death by her parents, two brothers, and two sisters. She leaves behind two sisters, Shirley and Kathy; one brother, Robert; two daughters, Linda and son-in-law Ed Shimp of Kingman and Susan of Kingman; three granddaughters, Kari and her husband, Michael Janak, Leah and her husband, Ricky Ruiz, and Natasha Shimp; one grandson, Brendan, and his wife, Brenda Shimp; seven great-grandchildren; and many nieces and nephews.

A memorial service will be held at Grace Lutheran Church at 11 a.m. Saturday, Feb. 21.