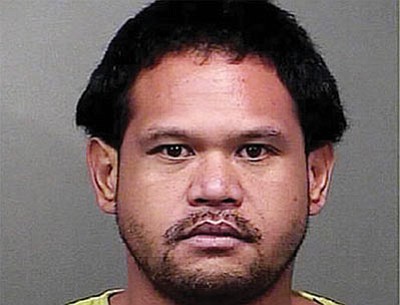 KINGMAN - A man who was indicted on attempted murder and other charges after beating and stabbing his fiancée in October was sentenced to a brief term in the Mohave County jail and placed on four years' probation Tuesday in Mohave County Superior Court.

Davie Kuihana Ahuna, 31, of Dolan Springs pleaded guilty to two felony counts of aggravated assault on Dec. 3. In exchange, prosecutors dismissed one count of attempted first-degree murder and one count of kidnapping.

On Oct. 4, Ahuna was arrested after he beat his 25-year-old girlfriend severely enough to make her lose consciousness several times. He then stabbed her in the leg with a knife while he was driving on U.S. 93 toward Kingman.

A motorist who saw Ahuna attack the woman called 911.

Judge Derek Carlisle acknowledged the attack was "fairly brutal" and told Ahuna he was "getting a very good deal."

According to statements made by the judge, defense attorney Art Higgs and prosecutor Rod Albright, the victim wrote letters asking the court for leniency, saying Ahuna "is a wonderful human being when he's not on methamphetamine." She said he needed treatment, not incarceration.

Higgs noted Ahuna was under the influence of the drug and had been awake for several days when he attacked the woman after she told him she wanted to break off the engagement. He said despite being beaten and stabbed, the woman did not sustain "lasting injuries."

Higgs also pointed out Ahuna has no criminal history in seeking leniency for his client.

Albright quietly told the judge the victim did not want Ahuna to go to prison and did not argue against Higgs' request for leniency. Ahuna did not make a statement to the judge.

Carlisle sentenced Ahuna to 187 days in the county jail and gave him credit for the 87 days he has already been in custody. Ahuna is eligible for work release - if he can regain a job he had at the Grand Canyon West Skywalk tourist attraction.

He sentenced Ahuna to four years intensive probation, which is essentially house arrest with frequent contact between the probationer and his or her officer.