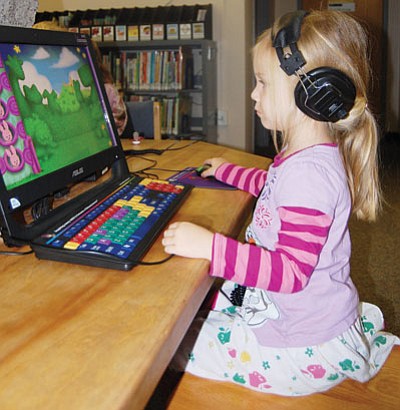 DOUG McMURDO/Miner<BR> Claire Duley, 4, plays on a computer at the Kingman library earlier this month. The library’s Youth Area has more than 10,000 items available for both children and their parents.

Ask the same question to a pair of librarians at the Mohave County Library-Kingman and you might get hit.

Just kidding. It's incredibly unlikely Beverly Clouse or Wendy Wagner have a violent bone in their respective bodies, but they are here to tell you the local library is just as relevant today as it was before technology gave us the Internet and e-books.

The library at 3269 Burbank St., across from Centennial Park, was a virtual beehive of activity on the morning of Dec. 15, a Monday. This was a quiet beehive, to be sure, but a beehive nonetheless.

Young children and their mothers were in the Youth Area of the roughly 15,000-square-foot facility. There the little ones can learn or play games on computers dedicated solely to them. They can put on a puppet show, play with toys or choose among roughly 10,000 books.

"Pete the Cat," "Dr. Seuss," and any of the Lego books are popular with the preschool set, according to Wagner, the Youth Area librarian.

Elementary school students are into "Diary of a Wimpy Kid," "Big Nate," and "38 Clues."

Teenagers, not surprisingly to anyone who has ever raised one, are more into the darker side of literature. The popularity of vampires has fallen, said Wagner. Now they are more interested in the date they will die. In fact, search on Google for "When will I die websites" and you'll get 740,000 hits. Some day they will learn some things just aren't worth knowing.

A million other things that are worth knowing, however, are available at the Kingman library.

Adult and teen library patrons in Kingman are far more likely to check out a nonfiction book than are their counterparts at the Bullhead City and Lake Havasu City branches, said Clouse, the library services manager in Kingman.

"The communities are different," she said. "In Kingman, people check out tons of nonfiction and that isn't the same in other communities."

Clouse said nonfiction interests are diverse, but history and spirituality are popular these days. "They used to read a lot of true crime, but that seems to have tapered off."

There are about 60,000 adult titles - fiction and nonfiction, DVDs, audiobooks, magazines and newspapers - but that's not all you get at the modern American library.

Perhaps the most important section of the Youth Area is for parents. Books offering advice on raising children, such as potty training tips or how to effectively home school, are in abundance. Story times for children ages 0-4 are held weekly; story times for older children are monthly.

The library hosts a Family Anime Club for teens, in which they discuss the latest graphic novel. Anime is a style of hand-drawn or computer-generated Japanese animation.

"Sometimes they dress up and have character-themed activities," said Wagner.

One fact about Kingman library patrons that separates them from their counterparts elsewhere is the number of reference inquiries the branch receives. Last year, Kingman residents made more than 19,000 such inquires, nearly 3,000 more than in Bullhead City and nearly 9,000 more than in Lake Havasu City. And the library has the means to answer those questions.

"We have up-to-date databases," said Clouse. Many of them go far beyond answering obscure questions. Patrons can learn how to write or update a job resume. Current legal forms used in local courts are available, and if someone needs to figure out how to change a fuel pump in a 1978 Pontiac Firebird, Chilton's Automotive is available in hard copy and online.

But that's not all you get.

Other services Students from kindergarten to adults engaged in postgraduate studies can get free and live online tutoring help.

Don't feel like studying? Rent the most recent movies released on DVD - but expect to have to wait a day or two.

So what are the most popular movies for patrons?

"So many people have had to give up Internet and cable (television)," said Clouse. "They come here to get movies and they tend to pick wholesome shows like "Dr. Quinn, Medicine Woman," "Touched by an Angel" and "The Waltons."

Gamers can check out the latest for Xbox, Wii and PlayStation.

You can also look for job openings, with one of the 22 computers for adults dedicated solely to employment searches, where they can write resumes, cover letters and complete job applications.

But there are some top-rate books. The New Arrivals section features books that are specific to the Southwest, particularly Arizona, and biographies. There is a small Spanish language section that is popular.

Library patrons can look up their family tree by using the library's membership in www.ancestry.com and www.heritage.com. There are also programs available to help patrons learn a second language.

With so much more than books available, Wagner said the Dewey Decimal System is still in place, but it's electronic and vast.

"We still have Dewey Decimal," she said. "But it's a card catalog system that's on steroids."

For more information, call the library at (928) 692-2665 or go online to http://mohavecountylibrary.info/mohave/kingman.asp.