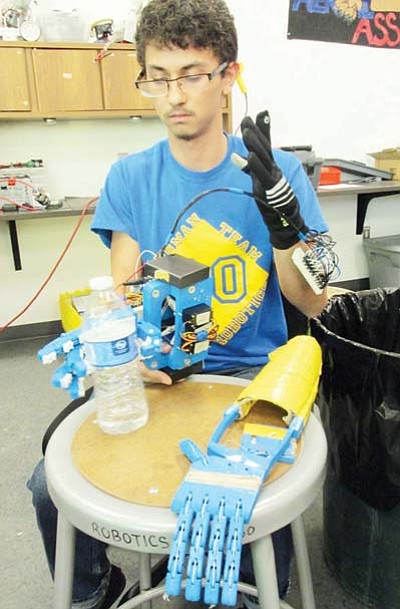 KIM STEELE/Miner<BR> Jesse Marquez, 17, a senior at Kingman High School, demonstrates how he uses his gloved hand to tell a robotic hand he created to pick up and hold a bottle of water.

KINGMAN - The Team 60 robotics club will finally get a new, permanent home, thanks to a helping hand in the form of a $25,000 grant from the Western Arizona Education/Joint Technical Education District.

It didn't hurt that Jesse Marquez, a 17-year-old senior at Kingman High School, demonstrated the responsiveness of a robotics hand that he built to clutch objects for people with limited or no use of their hands. The WAVE/JTED governing board sat transfixed as Marquez showed how the hand, which was controlled by his gloved hand, could pick up a water bottle.

"I love being able to think and make basic sketches and improve what I'm doing," said Marquez, who came up with the hand idea in April and has redesigned it six times since then. "There are five little motors in it so the fingers can move separately. I'm working on making it wireless right now."

Marquez, who wants to build drones someday, said he is splitting his time now between the robotic hand and helping his 24 team members from KHS, Lee Williams High School, Kingman Academy High School and home schooling programs design and build a robot.

The team, which has been active since 1996, is currently preparing for the upcoming FIRST Robotics Competition in March. It will focus on recycling.

WAVE/JTED regularly awards grants for continuing education classes at Kingman and Lee Williams high schools. The $25,000 grant will pay for half the cost of a new building at KHS that will house the robotics club, as well as programs that include large project fabrication and design.

Those include Computer Aided Manufacturing, Computer Numerical Control Systems, Computer Aided Designs and Real World Design Challenge. The programs are part of the STEM education initiatives that will be offered in the 2015-2016 school year at KHS. STEM courses are the state's core educational disciplines of science, technology, engineering and mathematics.

"This building will give these students a facility for capstone classes in those majors," said Janelle Victory, principal at KHS. "And it will get a whole lot of use. Our big goal is to use it for their projects. What WAVE/JTED is allowing us to offer these students with this grant is just amazing."

According to a WAVE/JTED timeline, the Kingman Unified School District Governing Board will take action in May to approve recommended vendors, and construction will begin at KHS in June. The steel building will be open for the start of school in July. KUSD will fund the salary of an engineering teacher for it.

But the robotics club is tasked with raising additional money - about $25,000 more - for the building, which will measure about 40-by-60 feet and include two walk-in doors and one roll-up door.

Currently, the club operates out of the engineering building at LWHS, but space is at a premium with the influx of another grade in the fall. Everything there from now to Feb. 21 screams robot-building time as the students gather each evening to create and craft their entry into the regionals in Phoenix and Las Vegas.

The robotics club recently was chosen by The Chrysler Foundation to receive a $5,000 grant, the maximum from the foundation that has awarded more than $2.3 million in grants since 1995 to FIRST programs. Team 60 was the only Arizona club to receive the grant, while one club in Illinois, two in Indiana and 37 in Michigan were chosen to get from $750 to $5,000 each.

"What we're meeting for is to build robots, but it's a lot more than that," said Kerry Shanaman, KHS robotics sponsor and continuing education teacher. "We're building kids and the development of their skills. We tell them they'll get out of this program what they put in it, so pick the brains of the mentors, because they know what's in the robots and makes them work."

One of those mentors is Brenton Elledge, 28, who participated in robotics when he was in high school and now owns Gizmo C & C in Kingman, where he makes parts for 3D printers. Elledge, who has a master's degree of industrial design, said he returned each weekend and summer while he attended college to provide help.

"This program is an apprenticeship and these kids get to see what we do day to day so hopefully they can take it over someday," said Elledge. "It's always a challenge going from being a student to a mentor, because you have to put the information out in a way they can understand and then step back and let them learn it."

Shanaman's wife, Jody Shanaman, is the sponsor for students who attend LWHS and has been working with them since 2001. She said the students participating in robotics club also are involved in other school activities, such as sports, business and health clubs. Robotics helps them with finances, public speaking, problem solving and other skills, she said.

Celeste Lucier, KAHS sponsor and a science teacher at Kingman Academy Middle School, said she got involved in 2010 when her son joined the team. Lucier, who was chosen last year as one of 29 educators statewide - the only one in Mohave County - to help test a framework for building new science standards, said robotics helps students connect between science and technology.

"As any parent of a child who has played with Legos, I've seen the pieces fitting together," said Lucier. "These students learn to stick to the task and not be defeated, they seek out knowledge, and they're rewarded with a chance to find out what's out there and grab hold of it. It's really an amazing thing."