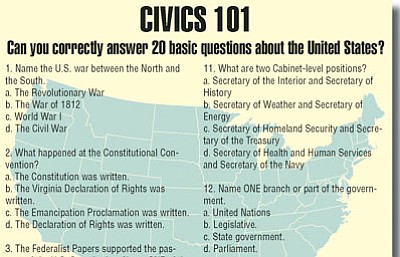 The full version of this quiz is below. (SPARKY KNOWLTON/Miner)

PHOENIX - The Arizona Legislature is putting a bill creating a new high school civics test on the fast track, answering a call from Gov. Doug Ducey to make it the very first law he signs as the state's chief executive.

The Senate and House education committees scheduled hearings for Thursday, and after a routine swing through the rules committee, House Bill 2064 and Senate Bill 1029 could come up for floor votes as early as the end of this week.

Because they're identical bills, a quick swap between chambers could send the legislation directly to Ducey. Republicans control both legislative chambers, and the bill is likely to easily pass, especially because of the Republican governor's support.

Ducey has embraced civics literacy as a key point in his plan to improve education in Arizona. He said in Monday's State of the State address that many students just aren't learning the basic civics they need to be good citizens and a large percentage can't identify people such as former U.S. Supreme Court Justice Sandra Day O'Connor, former President Ronald Reagan and Founding Father John Adams, the nation's second president.

"This is an issue that can and should unite us," Ducey said. "These are our children, and not long from now, it will be for them to vote on who sits in your chairs and who stands at this podium. How can we expect them to protect the principles on which this country was founded, if we are not preparing them for that task right now?"

The bills require students to correctly answer 60 of 100 questions on the civics portion of the test that is required to become a U.S. citizen. Passage would be required to earn a high school or GED diploma starting in the 2016-2017 school year.

The Arizona Education Association, which represents 20,000 teachers, is opposed to the test but will not actively lobby against it because it is not a top priority, spokeswoman Sheenae Shannon said Tuesday.

"Mostly it's just because this is another high stakes test, and an unfunded one at that," Shannon said. "Some students may not take tests very well, some students may do better at math, or science. We don't want rote memorization to be the only determination of why a student can graduate high school."

The test would be taken directly from the U.S. Citizenship and Naturalization Services, so little cost is expected.

"So no one is going to have to design a new test and administering the test is going to take a minimum amount of time," he said. "So hopefully there will be as close to no cost as possible."

The AEA said there will be costs for administering, grading and certifying the results of the test, at the least.

Former justice O'Connor, an Arizona native, has made civics education a prime focus in recent years.

"We're failing to impart the basic knowledge young people need to know to be effective citizens," O'Connor said at an event in New Hampshire in September. "In too many schools, the subject of civics is considered an elective or peripheral subject."

"Our founding fathers, and mothers, didn't consider civic education to be an elective," she added.