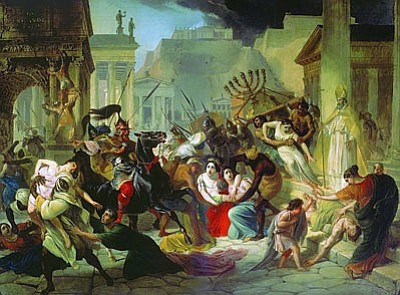 A recent piece on these pages continued a long chain of people using the America-Rome argument for rhetorical purposes.

Do a quick Google search and you'll see what I'm talking about: "Will America soon fall, just as Rome did?" from Fox News in July 2013; "Is America A New Rome?" from Business Insider in 2011; "Rome and America: A Shared Fate?" from The National Interest in 2014.

It's apparently the cool thing to do - draw allusions to one of the greatest empires on Earth. Who wouldn't be stoked to wear togas and flip-flops to work every day?

But where's the drama? The excitement? No doom and gloom? Nah, Fox can't have any of that.

Yes, we are like Rome and yes, we are destined to fall just like them. The welfare state, the lack of morals and values, a sputtering war machine, economic hardships, the fall of democracy: you know, the playbook that won the midterm elections for the Republicans. #ThanksObama.

History is a great ethos argument. It's happened before, so those events in the past carry credibility when it comes to cause and effect. When a country does this, a certain result will happen because a civilization in the past did the same thing.

It's an easy argument to make, but incredibly lazy and easy to pick apart when the history is wrong.

Let's chat about Rome. The Roman Empire was arguably one of the greatest civilizations on Earth, covering nearly 47 present-day countries and establishing Roman Law over nearly a quarter of all humans for more than 500 years. They gave us concrete, aqueducts, newspapers (how meta), welfare, the Julian Calender, odometers, sewers, paved roads, and more.

They were an autocracy, with the emperor having supreme power and senators providing advice.

The Romans were great, but their empire was severely flawed and suffered enough setbacks to cause it to split. Disease wiped out half of them in the span of two decades. Rome had no budget and relied on exhausting the resources of the territories they conquered. Their slave population was immense and they had no real middle class, and they liked to overspend on the military to feed the pomp of the emperor. Add a little lead poisoning in there, some invading barbarians, and the spread of Christianity (seen at the time as a "loss of traditional values") and bam! Now you have a civilization on the brink of collapse.

Rome wasn't built in a day, nor did it fall overnight. It takes decades, much longer than the eight years Obama will be in office, to dismantle an empire.

That's what makes the Rome-America comparison so humorous: it's an argument based on flawed causation. Rome fell. They have welfare. We have welfare. Therefore, we're all going to fall too! Quick, let's deny those in need because some people decided to milk the system!

For the sake of rhetoric, I will try to refute the Roman Empire-America comparison with one term: Globalization.

I can't understand why Americans still fear globalization, as it's been a fundamental driver of our society since the Cold War. While the Romans were very well traveled traders, they pale in comparison to the level of globalization we experience today. States are no longer secluded (unless we decide we want them secluded), nor can they afford to be. Our economies, our cultures are all linked. When economies fail, we all feel it. We share music, movies, books and more with one another. It creates a web of, for the most part, mutually beneficial agreements that make the nations of the world collectively stronger.

Rome never had that, and that's why it was allowed to burn.

We could plunge into chaos if everything failed at once, or if another world war broke out, or if an asteroid came hurtling towards Earth and Bruce Willis was too busy making another "Die Hard" to save us all. That's always on the table. Plus, Ted Cruz now heads the committee that funds NASA. He'd probably deny that an asteroid was coming and pull their funding...

But welfare? Immigration, when we as a nation started as immigrants? Keystone Pipeline? The destruction of Israel? Obamacare and the 160,000 Arizonians that now have health care? Those are outliers. They don't topple nations, especially when the nations of the world are so intrinsically linked.

So let Obama play his golf. He's going to need the break before tackling a Congress eager to dismantle everything he's passed since 2008. He's not an emperor or a czar. We may not be a democracy, but we sure as heck aren't an autocracy.

If we see the fall of the United States anytime in my lifetime, it won't be because we followed in the steps of Rome.

Our incarcerated citizen population (2.4 million and growing, half of whom committed victimless crimes and will never get decent jobs again), disappearing middle class, or money in politics might play a role.

Americans trumpet change over the fall of the republic, though. We love a good revolution, and columnists seem to think that proclaiming doom and gloom will somehow promote that change.

Take a deep breath, America. The world has come a long way since the days of Caesar. We've got this.