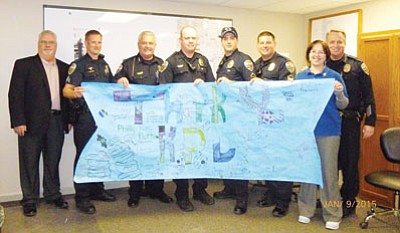 KINGMAN - The people of Kingman let local law enforcement personnel know just how much they appreciate the difficult job they do Jan. 9 during National Law Enforcement Appreciation Day.

The officers and staff at the Kingman Police Department says right back at you.

Many businesses and residents called the department to give their thanks, others stopped in personally - some who brought cards and homemade banners, said KPD spokeswoman Jennifer Sochocki.

The department also thanks local businessman Scott Dunton, who teamed up with Mr. D'z Diner to donate a portion of sales that day to the 100 Club of Arizona, a nonprofit that provides financial assistance to the families of law enforcement officers and firefighters who are killed or injured on the job.

"It was very humbling and overwhelming," said Chief Bob DeVries of the outpouring of support.