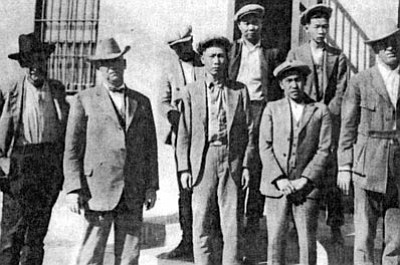 The Bing Kong Tong assassins after getting captured by Sheriff Mahoney and his deputies. (MOHAVE MUSEUM/Courtesy)

One of the recurring "breadcrumb" trails I've been finding over and over again in researching content for this column is the involvement of the Chinese in Kingman's history. Perhaps one of the most critical moments came in 1926, when a murder became the false harbinger of what is commonly known in Kingman as the Tong War.

Five alleged gunmen will be tried in November held without bail.

The five alleged gunmen, members of the Bing Kong Tong, who shot Tom King, Hop Sing tongman, last week Wednesday night and were later captured this side of Topock by local officers, were Wednesday bound over to the Superior court without bail on charge of first degree murder. Their trial will come up at the next jury session which will start the 22nd of November.

A clear case was brought against them through evidence obtained by County Attorney Blakely and Sheriff Mahoney and his deputies as well as help from members of the Hop Sing tong and a private detective they brought with them from Los Angeles and witnesses from Needles brought here by Chief Brown of that city. The trail of the five was traced through Needles to Kingman and Don On testified as an eye witness to the killing. The car was identified in the alley before the shooting and as it left the alley afterwards. Ordinarily a Chinese will not testify in a case of this kind thru fear of meeting a similar fate and Don On knew this fully but testified as an American citizen in upholding the laws of his adopted country in spite of it.

There were five Bing Kong men here, from the outside and thru the fears of violence of the four Hop Sings who also came from the outside, Sheriff Mahoney detailed a deputy to be with them constantly. This being true especially of the two of them who were thought to be gunmen.

A peculiar sidelight to the affair is that there were three sets of Chinese encamped in the Beale Hotel - a triangle at variance over the killing of Tom King. These were the two tong factions and the relatives of Tom King. However all is well that ends well and the walls of hotel rooms were not punctured with any stray bullets.

The Hop Sing is a wealthy tong and the Bing Kong is also strong. The war which started between them of which the Tom King killing was the result started about three weeks ago in Santa Barbara and has been in evidence in several coast cities since. Sometimes the perpetrators of the shootings have been caught but not always and each time they are the Hop Sing Tong is making a special effort to convict the alleged murderers. To assist in the prosecution they plan to bring in LeCompt Davis the famous criminal lawyer from Los Angeles and Bob Morrison form Prescott. The defense will have Lou Wallace of Kingman and possibly Ex-gubernatorial candidate Cox from Phoenix.

The trial next month will be a hard fought battle from all appearances.

As a precaution against any trouble at the county jail the five Bing Kong men held for murder were today removed to the Prescott jail.

For many of us in 2015, "tongs" sound like the Chinese mafia, and in many ways they were just that. A witness to the Tom King killing, Charlie Lum, described tongs in a special to the Miner published by Dick Waters in 1972.

"A tong was part labor union, part fraternal lodge and part mafia syndicate. It was a social organization where members and families could gather for enjoyment. It was a protective organization in that it helped you when someone or group was after your family, your wife or your daughter. It helped settle gambling debts and arguments. And it had its own executioners who resolved cases not conducive to conversation."

Tom King's execution spawned from his role as a pit boss in the local gambling hall. He supervised Paw Gow when he wasn't co-running the Mohave Café near the Beale Hotel. King had loaned a member of the Bing Kong Tong $2,000 to cover some gambling losses (the equivalent of $26,000 today). After the man refused to repay the money, King and the Hop Sing Tong became at odds with the Bing Kong Tong, and executioners were sent to take care of King.

The justice system in Arizona saw what was happening in California and their struggle with the tongs there. Not looking to have the same thing occur in Arizona, they took a year and a half to hand down a verdict to the five men involved in the murder of Tom King.

Four of the five men were sentenced to death by hanging, with the fifth man, 17-year-old Wong Lung, sentenced to life in prison. They were hung at dawn on June 22, 1928. Wong Lung was eventually released from prison but died at an early age.

In Dick Waters's recount of the murder, he offered a poignant perspective on the men involved and their place in history:

The four who died were the only men ever convicted of tong war executions. Their death probably signaled the end of an era, for revulsion with the crime and punishment was so great among Chinese, as well as Anglo-Saxons, that soon these people started seeking ways to provide for quicker and more sure assimilation of the alien culture into modern Americana.