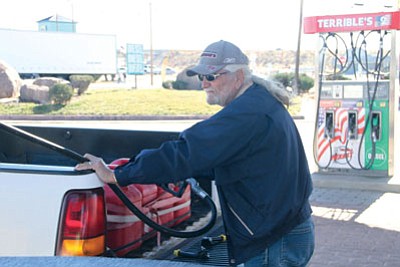 JC AMBERLYN/Miner<BR> Lyle Swangle was at Terrible’s on Andy Devine Avenue Thursday filling up several gas containers to supply the gas needs of various pieces of ranch equipment that he owns. He was in town to buy a number of things. He commented, “It sure makes it easier buying hay, because gas is so cheap.”

KINGMAN - Gasoline prices are headed below $2 a gallon in one of the steepest declines on record, and while oil producers and related businesses are crying about lost profits, consumers are lapping up enormous savings.

It's the first time gas prices have fallen below $2 a gallon since 2009.

Don Cronk figures he saves at least $100 a month on gas for his Dodge Ram truck, which gets about 13 miles to 15 miles a gallon.

"I suppose a trip to Circus-Circus is in order for the kids," Cronk said as he pumped fuel at Terrible Herbst on Route 66. "I don't contemplate where I'm going to drive as much. I go to the store, kids activities, basketball games, church things."

Rebecca Suncelia, manager of Express Stop Union 76 at 915 W. Beale St., said gasoline sales volume has quadrupled on weekends. Most of the people are traveling from the Phoenix area to Las Vegas and Laughlin. She's also seeing more tour buses.

Regular unleaded gasoline was selling for $2.12 a gallon Friday at Express Stop, and going down to $2.09.

"Every day we experience a two- or three-cent drop," Suncelia said. "I'm excited about it. I'd like to see them drop more. I really don't think it hurts the oil companies as much as they say. They're still making money from people traveling more and the volume."

She said tanker trucks arrive every other day to refill fuel supply, whereas they would normally come twice a week during the winter.

The average price for regular unleaded in Arizona is $1.90 a gallon, down from $2.29 a month ago and from $3.24 a year ago, according to Arizonagasprices.com. The national average is $2.04.

The drop in gasoline prices has slowed the economy in oil-producing states such as Texas, Oklahoma and North Dakota, but national economists say the benefits to consumers outweigh the costs to the oil business. People are able to reduce their debt and spend more at restaurants and stores and travel longer distances on vacation.

However, economists are warning consumers not to spend foolishly, as we can't expect gas prices to remain this low forever. AAA analysts forecast prices to remain below $3 a gallon for the rest of the year, barring a major swing in the global price for crude oil.

Pump prices have declined for a record 120 straight days, according to AAA, though the amount of declines is shrinking and the streak may soon end.

"I didn't think it would ever get back down," said Tom Whatley, who drives a GMC Sierra that gets 15 miles a gallon. "I remember when oil was $1 a barrel and gas was 25 cents (a gallon) and they'd give you a set of dishes and come out and put the gas in for you."

The drop in fuel prices could boost county tax revenues, as taxes are tacked onto each gallon of gasoline sold.

Arizona's fuel tax rate is 18 cents a gallon for regular gasoline, and 18 cents to 26 cents for diesel, depending upon the class of vehicle. About 19 percent of taxes collected go to counties through the Highway Users Revenue Fund, or HURF, and of that, roughly 5 percent comes to Mohave County, said Mike Hendrix, county administrator.

"Theoretically, as fuel prices drop, people buy more fuel and consequently the amount of taxes per gallon collected should increase," he said. "Of course there are other factors which affect fuel purchases, such as the economy and increasing vehicle efficiency."

If someone drives an average of 15,000 miles a year and their car gets 20 miles a gallon, Mohave County would receive less than $1.30 a year in gas taxes, he calculated.

That's "truly a bargain" for using 2,000 miles of roads maintained by the county, Hendrix noted.

A dispatcher for Kingman Transportation Services said the company's taxis run on propane, which has also dropped to $1.90 a gallon from about $2.80 last year.

"It varies just like gas," he said. "It goes up and down. They had the big freeze back East last year and all of our propane was going there."