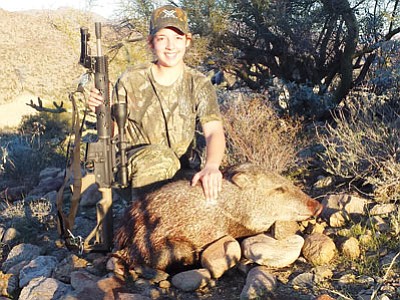 Laura Borden from Golden Valley shows the javelina she bagged on a youth-only hunt in Unit 18B. The boar was taken at a range of 40 yards. (DON MARTIN/For the Miner)

When it comes to providing opportunities for youth hunters in Arizona, we are fortunate that the Arizona Game and Fish Department recognizes that the future of sport hunting some day will be in the hands of young hunters.

I'm not sure there is any other state that provides such an array of opportunities for those who want to learn and experience the time-honored tradition of hunting.

Arizona has some of the best hunting in the nation. The department offers special youth-only opportunities for deer, elk, turkey and, my personal favorite, javelina. Over-the-counter youth-only turkey tags are also available.

Add in small game, where young hunters can pursue rabbits, quail, squirrels, doves, pheasant and predators, and one easily sees that opportunities abound in our state.

This year there were 1,145 youth-only javelina tags available in the state. In Region 3, there were tags offered to young hunters in Unit 16A, 18B and in a multi-unit package where hunters could hunt in any of seven game management units in northern Arizona.

This year, a couple of special young people in my life, Ryan and Laura Borden, drew a pair of the tags in Unit 18B.

To reward them for all the hard work they do, I offered to take them out for their hunt.

With their parents' full approval, we set the plans in motion.

That meant spending a lot of time at the Mohave Sportsman Club's 7 Mile Hill Range, where both of the young hunters became dialed in with the firearm they would use.

The rifle was a Rock River Arms, Fred Eichler Series AR-15. This light recoil rifle is chambered for the commercial .223 round. In testing at the range, we found that when using Fiocchi Match ammo with a 77-grain bullet, three-shot groups at 100 yards that could be covered with a dime were possible.

With the rifle dialed in and the fifth-wheel trailer we would be staying in set, we were ready to go.

Unfortunately, circumstances arose that prevented Ryan from going on the hunt, but Laura was ready to experience her first hunt for the pigs.

In Arizona, javelinas are the second most hunted big game animal.

A friend of mine, Eric Hawkinberry, who resides in Glendale, offered to assist on the hunt.

As we would see, his help and experience would be vital in ensuring that Laura would have a great hunt.

Hawkinberry had drawn an archery tag for the multi-unit javelina hunt, and he would be up there hunting in the days just before Laura's hunt would open.

On the last evening of Hawkinberry's hunt, he glassed up a herd of seven javelina on a faraway hillside.

Though they were too far for him to get to before dark, he knew they would be in the same area on opening day of Laura's hunt.

On Friday in the pre-dawn darkness, we moved to the area where Hawkinberry had last seen the pigs.

It was cold and I knew from experience that the pigs wouldn't be moving until after sunrise.

As we sat and glassed the hillside where Eric had last seen the pigs, you could feel the excitement.

Sure enough, it was Eric who located a pig walking in the thick turbinella oaks almost a mile away.

Then I spotted a couple more, and finally the herd started moving around.

A plan was made where Laura and I would head for the pigs, while Hawkinberry watched through his binoculars and spotting scope.

It took us a while to climb to the top of the mesa where the pigs had gone, and once on top, it was time to take a breather and rest some tired legs.

We started slowly working the top of the boulder-strewn mesa when I spotted the herd. They were feeding just 75 yards away.

The wind was in our face, and the by now the sun was to our backs. It was a perfect setup.

I quickly identified one of the boars in the herd, and for the next 30 minutes we moved five different times trying to find a rock large enough for Laura to rest the rifle on, while I kept an eye on the feeding pigs.

I finally called in the boar using only sounds that I make with my mouth. Just as Laura was squeezing off the shot, the pig whirled.

In the end, Laura experienced what many of us have. She didn't get to tag a pig.

It was six hours later when we got back to the truck, and we were both beat.

Then Eric dropped a bombshell on us.

"Those pigs are back out," he said.

Sure enough, the same pigs were back out feeding on the hillside we had left hours before.

The next morning we were back at the same place. It was very windy and cold, and we sat and glassed for over an hour, seeing nothing.

Just as we were about to give up, Eric spotted them about 300 yards from where we had last seen them.

Eric got the call to make the hike up the mountain with Laura while I watched and videotaped from below.

The stalk was perfect and so was her shooting.

In the end, at a range of 40 yards, Laura bagged a big boar that weighed 37 pounds, 14 ounces field-dressed.

But her javelina experience for 2015 is not over.

She has purchased a leftover tag for a Youth hunt in Unit 16A and that hunt goes through next weekend.

That means another chance for her to hunt the "gray ghosts of the desert."