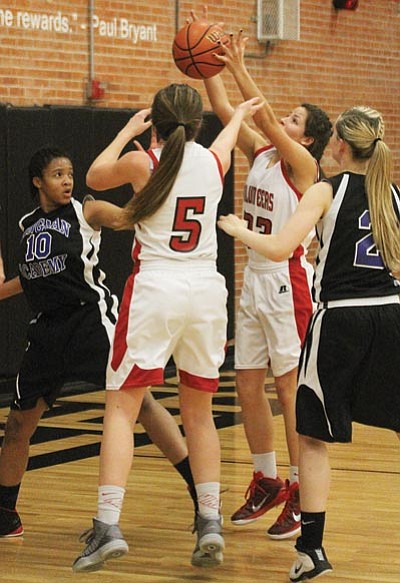 KINGMAN - The basketball sages say that beating a team three times in a season is a very difficult thing to do, and Kingman Academy learned the truth behind the proverb in a 48-26 loss to Lee Williams in a non-section game Tuesday at LWHS.

The Lady Vols were all over the Academy defensively, making it difficult for the Lady Tigers to get shots off. When the Academy did get a shot off, it was usually contested and unbalanced. Lee Williams (5-9 D-III) held the Lady Tigers to two points in the opening quarter as it built a 12-2 lead, and increased that margin by halftime, 30-13.

The Academy never threatened after that.

"I've been pleased with my defense the last two games," said LWHS girls basketball coach Cain Atkinson. "It has only taken all year for them to help each other out. Just wish it hadn't taken so long."

Whereas the Lady Tigers struggled with turnovers, the Lady Vols got plenty of quality shots behind the play of freshman point guard Madi Arave. She finished with 11 points, but was instrumental in finding her open teammates.

"I have to really rely on Madi," Atkinson said. "She's our point guard, and she's understanding that the team plays off of her. When she's patient, we get good shots. She's young and has continuously gotten better."

Arave looked very composed leading her charges on the floor and knows she has to grasp the whole take-your-time concept. It was why the Lady Vols got plenty of looks inside the key.

"We've been making sure we're patient and not rushing things," she said.

Beating the Academy for the first time this season wasn't the goal for the Lady Vols coming into the game.

"I think we were ready to play our game and not worry about playing Kingman rivals," Arave said. "We were just ready to play for us."

The Academy played at North Pointe Prep (0-13, 0-5) in a D-III, Section II game Wednesday. Results were not available by deadline.

The Lady Tigers next play at Bradshaw Mountain (8-6 D-II) at 7 p.m. Monday in Prescott Valley.