Feeding wildlife is dangerous for you, worse for the animals
Elk mob a family's picnic in Hualapais 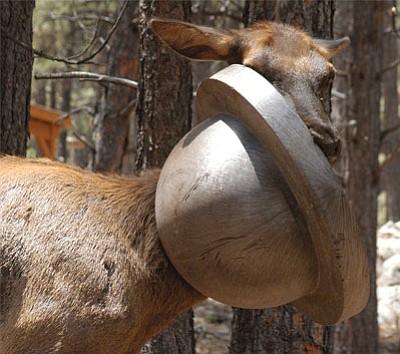 Elk have become so accustomed to human food that there were cases of them pulling trashcans lids off with their heads, leaving the lids stuck around their necks. (Courtesy)

KINGMAN - People who feed wildlife might believe they are doing a good deed, but nothing could be further from the truth.

Just ask the family whose picnic in the nearby Hualapai Mountains was interrupted June 29 when a group of elk encircled their table at Mohave County Parks. Nobody in the family had fed the elk, but a boy and a girl sustained minor injuries - something that never would have happened had people not fed them in the past, according to Zen Mocarski, the information and education program manager for the Arizona Game and Fish Region 3 office in Kingman.

"They were not feeding the animals," said Mocarski of the family. "But this encounter was clearly the result of past behaviors of the public." Mocarski said the girl suffered a bloody nose and minor injuries to her forehead and lower leg and the boy also suffered a bump on his forehead. The parents declined medical attention.

Game and Fish has for years told the public about the dangers of feeding wildlife, said Mocarski. This latest incident prompted a strong response. "The message has been clear and concise: stop feeding wildlife," he wrote in an email.

Park Superintendent Brandon Oktay expressed dismay over the incident, saying he was relieved the children's injuries were apparently minor.

"The family tried to keep the table between themselves and the elk, but the elk continued to move around the family," said Oktay. "The park is a place to visit and enjoy and I'm disappointed this family had to experience something like this. Those children were frightened."

"While I'm sure the children were scared, this could have turned out worse," said Mocarski. "Elk are large, wild animals and some people continue to treat them as if they're pets.

"When the call first came in I breathed a sigh of relief to hear the children were alright, but it is a bit disheartening to hear about the circumstances surrounding the encounter. Game and Fish has been trying to warn the public of the dangers of feeding animals for many years."

Mocarski said feeding issues in the residential community near the park have been "severe" for years, despite warnings. In 2007, for example, two elk needed to have trashcan lids removed from their necks. The park in turn had to replace the type of lids on cans and began posting warnings not to feed wildlife.

Not only does feeding wildlife deprive them of their natural caution toward humans, people who leave out food expose them to predators.

In 2004, a mountain lion killed two deer in three days in driveways within the nearby community, said Mocarski.

The area also attracts an unnaturally large number of animals - who doesn't like a free buffet? - which increases the possible transmission of diseases, such as Chronic Wasting Disease, which is spread through saliva. Feeding wild animals from the same source could decimate herds, Mocarski said.

The Grand Canyon was home to the deaths of two dozen deer 20 years ago. An examination revealed they died because they lost their ability to digest vegetation, their natural diet, because they became hooked on junk food, he said. Mocarski used uncharacteristically strong language to emphasize his concerns.

"These animals are supposed to disperse and forage, but some people mistakenly believe the animals need assistance. The fact is, this is not an act of selflessness; it is an act of selfishness. That fact has now resulted in two youth getting injured. This has to stop."

Oddly, the Legislature passed a statewide ordinance banning the feeding of wildlife, but only in counties with populations greater than 280,000 - Maricopa, Pima and Pinal.

If people truly want to help to ensure the animals have food, the best thing they can do is plant native vegetation.

"The bottom line is that things like chips or pretzels, which are not particularly good for humans, are certainly not good for wildlife," he said. "Neither are the hay bales visible throughout the (Hualapai Mountain) community. Allow these animals to forage naturally. They should have a natural fear of humans and not expect a handout."