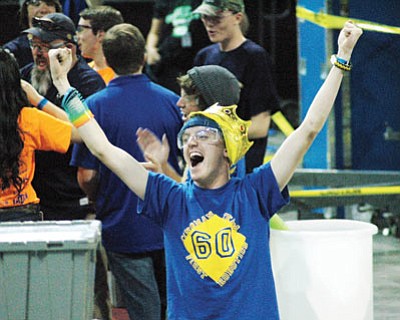 "It was pretty cool to get a chance to make history by participating in the first-ever AIA State Robotics Championships, then going on to win it," said participant Joseph Scholl. "That was superb."

Team 60, known as the Bionic Bulldogs, formed an alliance with two other teams - the Boxer Bots and Team Westwood - to outscore 27 other teams. Each team in the winning alliance received trophies and was crowned the first robotics champions of the AIA.

"We knew we were going in strong by being consistent, and we knew that's what we needed to win this game," said participant John Lewis. "Winning the state championship means that all of our hard work paid off in the end."

The event, which took place May 23 at the Prescott Valley Events Center, featured a game called Recycle Rush that is played by two alliances of three robots each. Robots score points by stacking totes on scoring platforms, capping those stacks with recycling containers, and properly disposing of foam pool noodles that represent litter.

Since Team Westwood earned the top spot after preliminary rounds, it was the first to select its Red Alliance of the Bionic Bulldogs and the Boxer Bots. They battled the Blue Alliance of Tempe Prep, Saguaro and Carl Hayden.

To win, an alliance had to take two out of three timed Recycle Rush games. The Red Alliance won the first two games, which gave them the victory and secured their place in the state's newest AIA competition.

"It was really nice to win, and the event was fun," said participant Rebecca Leggett. "It was a great experience. I wasn't sure if we were going to win because there were a lot of good teams there, but it made for good competition."

Team 60 is composed of about 25 students from Kingman, Lee Williams and Kingman Academy of Learning high schools, as well as home-schooled students. The team, which has been active since 1996, recently spent six weeks building a six-and-a-half-foot-tall robot for the regional robotics competitions in Chandler and Las Vegas.

That included designing, welding, machining, powder-coating and programming the robot for the events. The hard work paid off, as the team came in second at both regionals.

Those wins allowed Team 60 to travel to St. Louis, Mo., for the world championship competition, which took place April 23-26. With 42,000 people in attendance at the championships, 600 teams from all over the world gathered to compete.

The Bionic Bulldogs finished qualifications in the middle of the Carson Division field, 32nd of 75 teams. They were invited to join the seventh seeded alliance, which they accepted, and they progressed to the quarter-finals. From there, it was on to Prescott Valley for the AIA State Robotics Championship.

They were ready - until they unpacked the robot and the pit crew discovered it had a broken compressor that needed to be replaced. They did so, and the team participated in one practice match on May 22.

The second match proved to be a nail-biter. Both alliances created a number of stacks, and the announcer confirmed there had been a foul on Team 60's alliance by one of the alliance members. Everyone held their breath until the final results flashed on the screen.

The match and the state championship were won by the Red Alliance, with a second win of 146 to 144 points. Eight high schools share this win - Kingman High School, Kingman Academy of Learning, Lee Williams High School, Westwood High School, and four high schools in the Vail School District.

"It's exciting that Team 60 made it to nationals and then our team went on to win state," said participant James Scholl. "I enjoyed being able to see the other robot designs and compare them. I'm glad that I can learn programming, so I can help program our robot next year."