Stripe-R-Rama tournament is this weekend 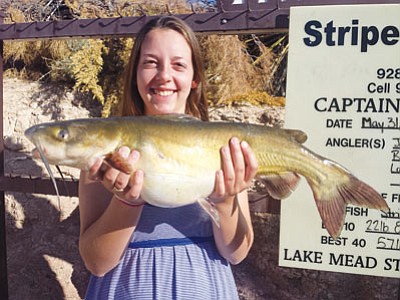 Laura Borden caught this big channel cat last Saturday night while pre-fishing for this weekend’s Stripe-R-Rama tournament at Lake Mead. The catfish is largest she has ever caught and weighed 6 pounds, 8 ounces. (DON MARTIN /For the Miner)

KINGMAN - Johnnie Hoeft, the tournament director for the largest overnight striper tournament of the summer, Stripe-R-Rama, thinks this is going to be one of the best tournaments ever - if the weather cooperates.

"If the weather is good, I think our anglers will catch a lot of fish," Hoeft said.

Right now there are 22 teams signed up. Hoeft expects another 20 or so to sign up before the tournament starts.

Entries are still being accepted, though the $75 entry fee must now be paid in cash.

Hoeft said that entries will be accepted right up until the start of the event, which is 7 p.m. Saturday at the dock of South Cove on Lake Mead. The event will end at 7 a.m. Sunday and the weigh-in will be at the Fisherman's Landing in Meadview.

You can choose your own partner in this tournament. Only two-person teams are allowed and boats, regardless of size, must have current registration and insurance, Hoeft said.

Anglers will check in their best 40 stripers and are eligible to win cash awards, plaques and prizes. There is also an award for the heaviest non-striper that is brought to the scales.

Hoeft noted that all fish must be kept on ice, and that officers from both the National Park Service and the Arizona Game and Fish Department will be on hand to check for spoiled fish.

If a team is cited for any violation, they are disqualified from the tournament.

The event is once again being sponsored by local hotel magnate John Patel. Patel has sponsored this event since its inception and always ensures that every angler who fishes wins a prize.

To enter the event or for more information, contact Hoeft at (928) 716-2616 or by email at guidehunter@hotmail.com.