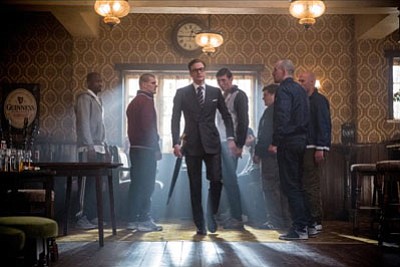 A spy organization recruits an unrefined but promising street kid into the agency's ultra-competitive training program, just as a global threat emerges from a twisted tech genius (IMDb). Matthew Vaughn did a terrific job with "Kick-Ass," and this film carries over his distinct style to a familiar genre. Watching Colin Firth take on legions of bad guys is satisfying to watch.

In Depression-era North Carolina, the future of George Pemberton's timber empire becomes complicated when he marries Serena (IMDb). This film snuck up on many people, and seeing Lawrence and Cooper in another romance film does sound intriguing. Critics slammed it, saying the film falls victim to the period and a script that didn't go anywhere.

A group of teens discover secret plans of a time machine, and construct one. However, things start to get out of control (IMDb). A promising concept that seems to fall short due to some style choices. Time-travel fans will enjoy how this film tackles that paradox if they can overlook the shortcomings of some jarring camera work and shallow character development.

Just like previous major film releases, LEGO is working with Warner Bros. to launch a LEGO game tied in with the series. This installment will take place over all four films. Players will get to solve LEGO-based puzzles tied in to the movies. This game is definitely for the kids.

•The Truth According to Us - Annie Barrows (512 pages)

The Romeyn family is a fixture in the town, their identity tied to its knotty history. Layla enters their lives and lights a match to the family veneer and a truth comes to light that will change each of their lives forever (Goodreads.com).

This is a gripping account of the death of one of the most reviled villains of the 20th century - a man whose regime of murder and terror haunts the world even today (Goodreads.com).

Anita Blake has the highest kill count of any vampire executioner in the country. She's a U.S. Marshal who can erase zombies with the best of them. But ever since she and master vampire Jean-Claude went public with their engagement, all she is to anyone and everyone is Jean Claude's fiancée (Goodreads.com). This is the 24th novel in the Anita Blake, Vampire Hunter series.

In this charming, evocative, soul-touching novel, Frank once again takes us deep into the heart of the magical Lowcountry where three amazing middle-aged women are bonded by another amazing woman's death (Goodreads.com).