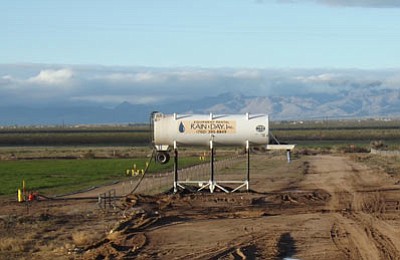 A water tank is set up to irrigate crops in the Red Lake area. Many local residents are worried about farm operations depleting Hualapai Valley basin aquifers. (Courtesy photo)

KINGMAN - Lake Mead's water level is projected to dip to a record low this summer, which could prompt water restrictions for Arizona in the next 18 months similar to those imposed in California.

Stockton Hill Farms, funded by East Coast investors, could draw as much as 60,000 to 70,000 acre-feet a year from Kingman aquifers.

That's got people around Kingman fretting about future water supply.

Laurel Penrod, a fifth-generation Daughter of the Pioneers who married into a family of well drillers, is incredulous that Mohave County officials allowed farming in the Red Lake area. It's part of the Hualapai Valley basin that supplies water to Kingman.

"How sad it is to see that beautiful area desecrated for two crazy money changers that are sitting on top of our aquifers, sending our water to China by way of alfalfa," Penrod said. "The whole thing makes me ill."

State law is currently stacked against the county having much authority over water use, especially when it comes to agriculture, Mohave County Supervisor Jean Bishop said. That authority lies solely with the Arizona Department of Water Resources.

"What we can do is continue to fight to oppose the Rhodes land exchange, which would expand and increase Rhodes' ability to mine water for agriculture," Bishop said.

Stockton Hill Farms, a subsidiary of Wood Creek Capital, has complied with local and state water laws, she said.

Bob Saul, manager of the investment fund, told supervisors in May he wants Stockton Hill Farms' operations to be "transparent" in the community, and seems to be more willing to communicate with local leaders than Rhodes.

Saul said the company intends to use conservative irrigation methods, and will run water trucks and adjust the schedule for plowing fields in order to keep the dust down.

"Water is one of my No. 1 concerns here locally, as well as the entire Southwest," Supervisor Bishop said. "I will be keeping a watchful eye on the progress of both farms and I will fight to ensure legislation is not passed that would allow water to be transferred outside of Mohave County."

Aquifers are drying up across the state, and homeowners and ranchers are drilling deeper to find enough water for their needs. ADWR needs to look at the entire picture, not just Active Management Areas, the supervisor said.

Direct impact of groundwater overdraft includes reduced water supply due to aquifer depletion or groundwater contamination, increased groundwater pumping costs, and the costs of well replacement or deepening, according to a 2014 study from Stanford Woods Institute for the Environment.

"An increasing number of people with domestic wells are seeing them dry up, leading to conflicts," the report stated. "Rural landowners and small-scale farmers are disproportionately affected by overdraft as they have fewer financial resources to dig new or deeper wells or diversify their water supply."

Arizona has been able to withstand a 15-year drought by adhering to smart conservation methods and drawing from underground reservoirs. However, the state is going to lose part of its Colorado River allotment until Lake Mead levels rise again.

"We have Arizona farmers selling their Colorado (River) water rights to cities because it's worth more sold than it is to farm, and California corporations and foreign investors are buying up tens of thousands of acres to farm crops for out-of-state and out-of-country sales, which will further deplete our aquifers," Johnson said.

With some 20,000 farms and ranches, Arizona's agricultural industry contributes over $17.1 billion to the state's economy. Arizona is among the leading producers of lettuce, cauliflower, broccoli and citrus.

That could change if farmers continue to find their wells running dry, Johnson said.

The Central Arizona Project, launched in the late 1970s, brings water from the Colorado River to Phoenix and Tucson, but it does little to protect aquifers in rural areas. They're beginning to see drastic drops in groundwater supply.

"Mohave County should look to Willcox right now to see what could possibly happen here within the next decade if nothing changes," Johnson said.

Willcox, a town of 3,757 in Cochise County, produces 75 percent of the state's wine grapes. Groundwater pumping has gone unregulated for years and local residents have recently seen water levels plummet deeper than any other time in history.

Willcox is one of more than 40 other underground water basins in the state that have shrunk since 1993.

"The bottom line is the state needs to look at all water resources," Johnson said. "Arizona is a major player in our country's food supply. If Arizona wells continue to run dry, where are we going to get our food?"