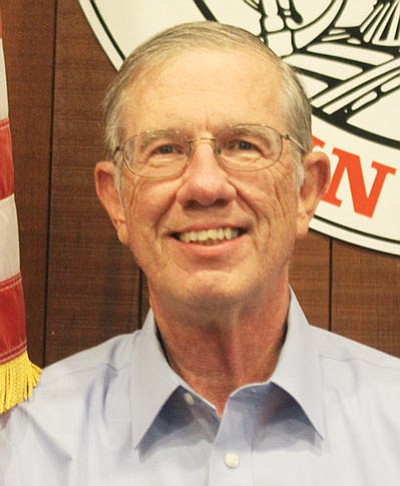 KINGMAN - A loaded agenda awaits Mayor Richard Anderson and the City Council today, including a possible decision to keep permanent a half-cent increase in the sales tax approved in 2013 and scheduled to expire on June 30, 2016.

With no other revenue stream available, the half-cent increase was a hot topic during budget workshops this spring, but Council members failed to reach consensus on whether to make the increase permanent. The Council could set a public hearing on the issue for July 21.

In other items of note:

• The Council is set to meet in closed session to discuss the city's proposed contract with Jeffrey Singer, an Oklahoma judge who was picked to replace longtime Kingman Magistrate Kathy McCoy, who will resign June 30. If that goes well, the Council will regroup in public and ratify the contract and then McCoy will swear in Singer.

• The Council could vote to consolidate and extend about $40 million in loans obtained through the state's Water Infrastructure Finance Authority to pay for the downtown and Hilltop sewer plants.

• The Council could agree to renegotiate its contract with Levi Pitts, manager of the Cerbat Cliffs Golf Course. Pitts' current contract expires at the end of the year.

• The Council could go into closed session to discuss pending contract negotiations with the Kingman Visitors Center.