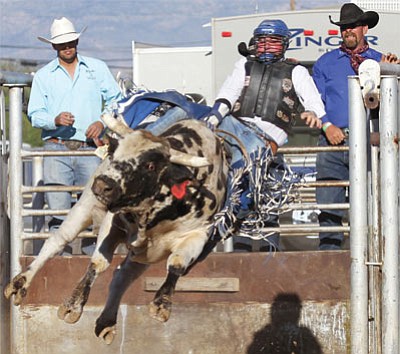 The inaugural Best of the West on Route 66 Festival will combine the Andy Devine Days parade and rodeo and car shows. (JC AMBERLYN/Miner)

KINGMAN - The success of last summer's International Route 66 Festival has prompted the city of Kingman and private groups and businesses to take steps that will make it an annual event - one significantly larger than last year's.

The Kingman festival will be known as the Best of the West on Route 66. This year the event will be held over the weekend of Sept. 25-27 and will incorporate two of Kingman's most popular events - car shows and the parade and rodeo that define Andy Devine Days.

"There is so much cooperation and collaboration this year," said Dora Manley, who once again will serve as the event's primary coordinator. "I feel really good about it, because we get to give Americans and our European visitors what they like best about the West."

An estimated 8,000 people visited Kingman over three days last August as the city hosted the International Route 66 Festival, which visits a different community on the storied highway each year. Visitors came from 32 states and 24 countries at least one of the three days - a strong indication of Kingman's lure as a Route 66 destination.

Mayor Richard Anderson confirmed that the city will fill the same role it did last year when city staff handled the difficult logistics. Police Chief Bob DeVries and his staff will again develop a traffic plan.

"I directed [City Manager] John Dougherty to work on a recurring, annual festival so we can take advantage of the success of the International Route 66 Festival," said Anderson. "Now, we've got the festival as part of Andy Devine Days, the rodeo, the parade and all that goes along with it and I'm extremely pleased."

Anderson said there's a push on to bring mining companies into the sponsorship fold, as the industry is closely identified to the region's history and future.

Other key people, businesses and groups also have committed, including the Mohave County Fairgrounds and the Kingsmen, organizer of the annual PRCA rodeo.

"The event will provide all of the elements that tourists and locals love about our community," said Jamie Taylor, who's acting as spokesperson for a loosely knit group working to promote Kingman. "Cars and cowboys."

Manley said TNT Auto Center would again sponsor and organize the car show. The Chamber of Commerce has contracted with the popular retro band Flash Cadillac, who will perform in the Lee Williams High auditorium, said Manley in an interview Monday.

"We're coming right along," she said.

The Sandbox group is developing a beautification effort and engraved bricks that will become part of the Route 66 easement will again be sold. They can be ordered online now at www.bricksareus.com.

Manley said organizers are looking for businesses that want to sponsor events. Many have already made a commitment.

The festival once again will be held in Locomotive Park, with car shows, musical entertainment, food and other vendors.

A new twist is The Andy Devine Days parade and rodeo sponsored by the Kingsmen also will be part of the festival, as will the annual 100 Club Dinner.

Opening ceremonies will take place on the evening of Sept. 25. The 2016 inductees to the Route 66 Walk of Fame will be honored on Saturday and the popular Route 66 Authors, Artists & Collectors will make a return engagement.

Other events are in the planning stage.

For Manley, this year's event should be a bit easier to pull off despite the fact it is much larger in scope.

The joining of the festival with Andy Devine Days was embraced, said Manley.

"The Kingsmen have been at every one of our meetings," she said. "We're working together on event timing and I'm very grateful to them."

Also back to play a key role is Jim Hinckley, the author of several books on the iconic highway and Kingman's international Route 66 goodwill ambassador.