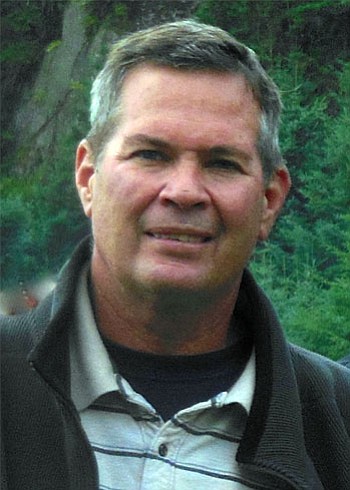 Steven Harlow Jacobson, 55, passed away peacefully at home March 25, 2015, after a two-year battle with ALS.

They moved to Kingman in 1984, where Steve began his 30-year career with Citizens Utilities/UniSource Energy. He was a power lineman by trade and loved his work in the field. Steve always said he felt like he accomplished something important at the end of every day.

Steve was always active in the community. With young kids at home, you could find Steve coaching Little League and soccer (he even served as NAYSL secretary), and attending all the kids events. As a community volunteer, Steve served meals at the holidays, shopped with Clothes for Kids, built dog kennels for Kingman Aid to Abused People, built a storage pantry for the weekend backpack program for the Boys and Girls Club, and until recently served on the Clean City Commission as chairman and too many more activities to count. Steve was always working out at KFRC and enjoyed the friendships he made there over the last 30 years. He was an avid racquetball player and also played softball, volleyball and golf.

Steve is survived by his wife of 34 years, Eileen; children Jessica Phipps (Colin), Tyler Jacobson (Brittney) and Katelyn Jacobson; three granddaughters, Brinley, Cheyenne and Harlow; his sister, Jacquie Barry (George) of Maryville, Tenn.; nieces; nephews and extended family. He was preceded in death by his parents.

Those who knew Steve knew his No. 1 passion in life was his family. He will be remembered as a kind man, one who never said a bad word about anyone.Steve had a positive attitude, was loyal and honest, and loved his beer and rock and roll music.

Friends, family and those whose lives Steve touched are invited to Connection Point Church, 4435 N. Shadow Road in Kingman, at noon Saturday, April 4, followed by a Celebration of Life at Champ's Pub & Grill, 2215 E. Butler Avenue.

In lieu of flowers, donations can be made to the Arizona ALS Association, 360 E East Coronado Road Suite 140, Phoenix, AZ 85004.