Laughs few, far between in 'Get Hard' 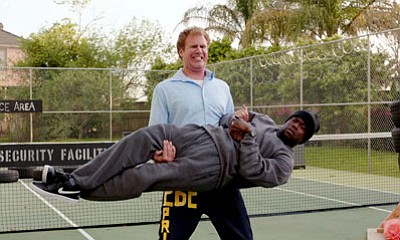 If you can get past the title and all its sarcastic attachments and see there are two really good comedians, Will Ferrell and Kevin Hart, playing the leads this film might have a chance. I go to the movies to be entertained and I certainly had a few good laughs - but those were few and far between.

The real star in this film is Kevin Hart. He was funny. At times Ferrell's character was actually offensive.

I tried to look at it like maybe the film is taking issue with some accepted ways of life or perhaps trying to illustrate the nonsensical way communities get along. Even a clinical approach to the issues raised doesn't grant enough distance to not be offended.

Ferrell plays a successful and wildly rich stock trader who has spent his entire life with a silver spoon in his mouth. He is suddenly forced to accept he is going to prison. Terrified of the life he will soon lead, he enlists Kevin Hart's character Darnell to teach him the prison ways.

Why did he choose Hart? Simply because he was black and assumed he had been in prison. Granted, Ferrell is naïve and Hart was never in prison. But Hart needs money and agrees to help Ferrell.

Hart does an outstanding job of playing the part of a Mexican gang member and black gang member fighting over Ferrell.

I really didn't think there is a political motive in "Get Hard." There's been comparisons of "Get Hard" to "Blazing Saddles" in that it pushes the envelope in what might be socially acceptable. In "Blazing Saddles" you had the campfire scene where passing gas on the big screen was seen as pushing the envelope but it was done in a way that made it funny.

In "Get Hard" you have Hart telling Ferrell he better get started practicing servicing men in order to survive in prison. There is a quick glimpse of male genitalia. The whole scene went on and on and was devoid of any humor whatsoever. All that came out of that was a feeling of awkwardness.

"Get Hard" is about an hour and a half and is rated R. This movie - with gratuitous nudity, male rape discussions and male genitalia - is absolutely not appropriate for those under 18.

Kevin Hart's performance is outstanding but I'll have to give the movie 1-1/2 miners out of 4.

Ferrell, Hart go for laughs in release of 'Get Hard'
Johnson steals scenes in 'Central Intelligence'
‘The Upside’ a light-hearted comedy
'Ride Along 2' filled with funny mayhem
Leave it to Bieber opening too much for 'Zoolander 2' to live up to
Event Calendar