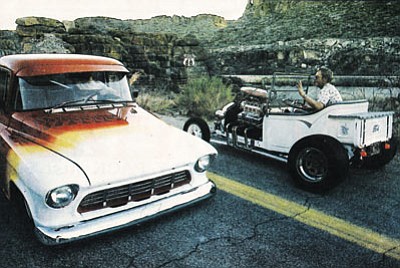 Bob Patterson, right, riding in a modified 1928 Model T, exchanges greetings with Kayelynn Johnson in a 1955 Chevy truck on Route 66 west of Kingman. The photo ran in a special supplement to the Miner in 1990. (BOB SMITH/Miner)

With the 28th Annual Fun Run coming through Kingman this weekend, I was curious about what got this event rolling and kept it going for such a long time. For as long as I can remember, Historic Route 66 has always been as it is today: a historic American byway preserved by communities like Kingman. The Will Rogers Highway, The Main Street of America, The Mother Road.

While I've never personally had a strong connection with it, I understood its appeal and what it means to so many people.

It wasn't that long ago that Route 66 nearly died. Interstate 40 was completed in 1983, and by that time Route 66 as a highway was on its last legs. Instead of the twists and curves going through backcountry towns, travelers could hop on I-40 and get across the state in record time. Slowly but surely, the majesty of driving on the open road started to fade away.

It didn't take long for revitalization efforts to start, and perhaps the largest and most influential one started here in Arizona. Angel Delgadillo and Jerry Richard started up the Historic Route 66 Association of Arizona in 1987 with a dozen other Arizona residents to "see what could be done to prevent further deterioration of this American Heritage," as stated in their first press release.

It took them nine months to get Route 66 dedicated as a State Historic Road.

The ribbon-cutting ceremonies were scheduled for April 22-24, 1988. Events included dedications from Will Rogers Jr. and Gov. Rose Mofford, the Dick Clark band and other music, and a Fun Run car rally and show going from Seligman to Topock.

What started with 153 entrants and a few events has ballooned to more than 800 cars and a whole slate of events scattered throughout the weekend.

It was three days of non-stop fun and excitement this weekend when people from all over the country gathered in Mohave County to "Get our Kicks on Route 66."

On Saturday, Gov. Rose Mofford stopped in Seligman to officially open the dedicated section of the historic highway between Seligman and Kingman.

"On behalf of the residents of Arizona, I would like to thank you all for preserving a piece of history," Mofford said about the dedication.

Angel Delgadillo, president of the Historic Route 66 Association and a major force behind the dedication of the roadway, said he never would have believed there would be so much excitement surrounding the road.

"As you head on west, stop and discover America," Delgadillo said to the participants of the huge car rally that started out from Seligman to Kingman.

He thanked members of the Arizona Department of Transportation for giving official designation to Route 66 as a historic road and expressed appreciation to everyone who helped in the effort to preserve the roadway.

"Some people have said that Route 66 is a sleeping giant, but it's not a giant. It's a monster," Delgadillo said with a laugh. "Just being here today is proof that we're on the right road. This road has meant a lot to the communities. In Seligman, we thought we were abandoned. This here proves we're not."

Will Rogers, Jr., the son of the famous humorist and motion picture star, noted he has fond memories of the road and his father's connection with Route 66.

"In 1926, a man named Disney from Oklahoma gave the Route 66 name to the highway. He thought it was a good idea to call it Will Rogers Highway after my father," Rogers said. "It was called Will Rogers Highway until World War II. I'm glad to be here and be a part of this moment and I'm very glad you're preserving it."

He added that the Ford Motor Company measured the distance from Seligman to Oatman and found there are 157.9 miles of historic roadway between the two cities.

Richard said the association definitely plans to hold another celebration for the historic road next year.