In Arizona, a 'normal' fire season can still be pretty bad 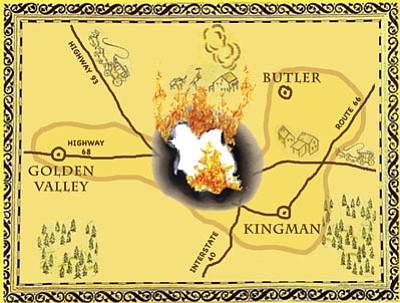 KINGMAN - When it comes to fire season, it doesn't matter if winter and spring were wetter than a fish or dry as a mouthful of cotton.

Either scenario brings the potential for severe wildfires that threaten people and property in the Southwest.

When rain doesn't fall in the cooler months, the drought and warmer temperatures turn every living thing to tinder so combustible it is one lit match or lightning strike away from a wholesale conflagration.

When snow falls in the winter and showers come in the spring, trees, grasses and plants grow rapidly and add abundant fuel to feed devastating wildfires.

The Predictive Services Department of the National Interagency Fire Center forecasts a normal year for Northern Arizona when it comes to the potential for significant wildfires.

Unfortunately, "normal" for the Southwest means the potential is still extreme.

The same can't be said for the southwestern part of Arizona, which in May will be above normal, along with Northern California and much of Hawaii, according to the fire center.

The threat increases in June and July across the West Coast and the Great Basin. Drought-ravaged California and much of the West experienced less than 25 percent of normal precipitation over the winter.

The months of May through the end of July are predicted to be warmer than usual across the West, according to the agency, with below-normal rainfall, which will increase the risk for wildfire.

In Arizona and the Southwest, fire center experts said the "unusually high amounts of fine fuel," such as grasses, provide the primary concern for wildfires beginning this month.

Another concern is drought. Central, far western and far northern Arizona is home to the driest conditions in the Southwest, with below normal winter snowpack stretching all the way to southwestern New Mexico, according to the center.

On the plus side, climate forecasters predict "semi-frequent" storms for the region - but those storms also increase the likelihood that lightning strikes will spark wildfires.

The 2014 fire season didn't affect the Kingman area other than small, easily contained brushfires that were started by humans or Mother Nature.

The same can't be said about 2013, when the Dean Peak Fire burned more than 7,000 acres in the Hualapai Mountains in late June.

While the blaze forced the evacuation of residents in the Pinion Pine area and came perilously close to destroying homes, the real tragedy of the 2013 fire season occurred at the same time the Dean Peak Fire was blazing.

Nineteen firefighters with the Granite Mountain Hotshots out of Prescott died fighting the Yarnell Hill Fire on June 30.

The tragedy caused the fire service to reexamine its wildfire fighting protocols and made many question if protecting properties was worth the risk to life.

According to a report from the University of Arizona Climate Assessment for the Southwest, fire season began this month and will last at least through July, when monsoons could put an end to the threat.

While last winter was wetter than normal and this spring has continued that pattern, fire managers will keep a close eye on the spring bloom, especially once dry and windy conditions elevate the risk.

And while fire season occurs in late spring in this region of the Southwest, longtime drought conditions throughout Arizona, Nevada and especially California have created a dangerous situation. Trees and plants die and dry after prolonged drought, adding tons of deadfall fuel to an already abundant source of combustible material.

Those powerful winds that hit the Kingman area every spring do more than make for a bad hair day - they contribute to the wildfire risk by drying out both the mountains and the desert.