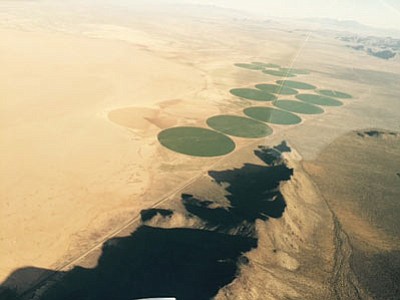 A view of Red Lakes fields taken in April. While many are concerned about farming’s potential impact, owners insist there’s enough water. (Courtesy)

KINGMAN - Distancing himself from controversial developer Jim Rhodes, the principal behind Stockton Hill Farms said his business theme from the beginning has been to bring "transparency" to farming operations in the Red Lake and Valle Vista areas.

"We saw this project as very exciting, the most exciting farmland project in the nation," the pension fund manager from Massachusetts said.

"Our intention is to establish agriculture here in a sustainable way. I know there's debate as to what that means. Our definition is best management practices. We're not in the business of shortcuts or jeopardizing everyone's aquifer in the basin."

An August 2014 hydrogeology report on the Hualapai basin by geologist Luis Vegas estimated 7.6 million acre-feet in storage to a depth of 1,200 feet, with a negative recharge of 32,000 acre-feet a year. That's assuming 25,000 acre-feet being used by Kingman Farms, owned by Rhodes.

"It's very difficult to calculate recharge," Saul said. "Hydrologists have a lot of different estimates. It could last 100 years, 200 years. Drip irrigation is a very efficient use of water and changes those equations dramatically."

The Arizona Department of Water Resources set up a system to measure the aquifer's water levels. That will be "fascinating data" because it will show how much the aquifer recharges in the off-season, Saul said.

"We're going to sell this property some day," he said. "It's an investment. We'd love to hold it for 25 years, but we probably won't. When we go to sell to some California farmer moving out of the (San Joaquin) valley, they're going to want to see how healthy this aquifer is."

The primary crop for now is alfalfa, which has international demand and adds nitrogen to the soil, he said. Much of the crop is being shipped to California, where there's a "certain desperation" for the product among dairy farmers, Saul added.

Supervisor Buster Johnson said the numbers thrown around by Saul for the aquifer recharge are "bogus," and he questioned Rhodes' involvement in Stockton Hill Farms.

Rhodes is a "substantial minority partner" in Stockton Hill Farms, but has no input on management decisions, Saul noted.

Stockton Hill Farms terminated its original development agreement with Rhodes and Kingman Farms, though Saul said he wouldn't go into details about it.

"We'll be as sensitive as we can to the community. Our goal is to be transparent and thoughtful about helping to build a sustainable local farm economy," he said.

Stockton Hill Farms was the source of about 50 dust complaints filed with the Arizona Department of Environmental Quality in late March and early April.

Farm managers met with a state inspector and complied with recommendations to stop tilling the land on March 31.

"The only activity out there is water trucks. There are no giant tractors. We're not creating dust clouds. At least on those sections, it's not our fault," Saul said.

Yes, there is immigrant labor on the farm, but they're all documented and well trained, Saul answered. Stockton Hill Farms contracts with a local farm manager and it's his decision to use immigrant labor.

"Our intent is to build the local economy and build the labor force. We want to employ locally, but we don't have that base yet," Saul said.

Desert almond farmers are staking out water rights in Mohave County
Mohave County in perilous water position, supervisor warns
Water meeting has folks talking about farming
In the midst of a drought, there is no stopping farmers from dipping deep into wells
Watson's goal: Stop proposed land swap between BLM, Rhodes