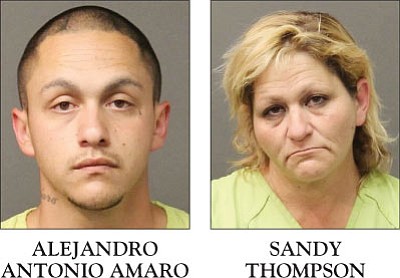 KINGMAN - A mother and her adult son were arrested late Monday night following an investigation that began just before 5 a.m. Feb. 15 when Mohave County Sheriff's deputies attempted to conduct a traffic stop.

Alejandro Antonio Amaro, 25, allegedly didn't stop in February, but he did stop at about 11:10 p.m. Monday when deputies pulled him over in the area of Marshall Drive and Ames Avenue.

Amaro was the alleged driver of a 1992 red Chevrolet who fled from deputies in February and allegedly collided with another vehicle. He was able to get away when deputies called off the pursuit because they were in a residential area.

Deputies could not locate the driver of the car Amaro allegedly hit, but they found the Chevrolet parked in the 3100 block of Hearne Avenue. A cell phone that belonged to Amaro was on the driver's side floorboard and a record check showed his driver's license had been suspended.

The vehicle was registered to Sandy Thompson, 47, who arrived while deputies processed the vehicle. She allegedly said somebody named Eric had been driving the vehicle. Deputies learned Thompson was Amaro's mother. She reportedly told them her son was in Flagstaff.

The victim of the hit-and-run reported the accident that occurred in the area of Melody Street and Devlin Avenue. She was not injured, but her car was damaged.

In early April, the Arizona Department of Public Safety advised deputies that fingerprints they lifted from the car matched Amaro. Deputies had sought Amaro for months, but a chance traffic stop is what led them to him - and his mother, who was in the passenger seat of a black Chevrolet pickup.

The pair was taken into custody without incident. A search of Amaro allegedly revealed he possessed a plastic bag containing a white crystal substance.

While Thompson was being booked, detention officers allegedly found she possessed a white crystal substance and marijuana.

Amaro was charged with felony counts of aggravated assault for the hit-and-run, unlawful flight from law enforcement, possession of dangerous drugs, possession of drug paraphernalia and a misdemeanor charge of driving on a suspended license.

Thompson was charged with felony counts of possession of dangerous drugs, possession of marijuana, possession of drug paraphernalia, taking contraband into a corrections facility and a misdemeanor count of false report to law enforcement.