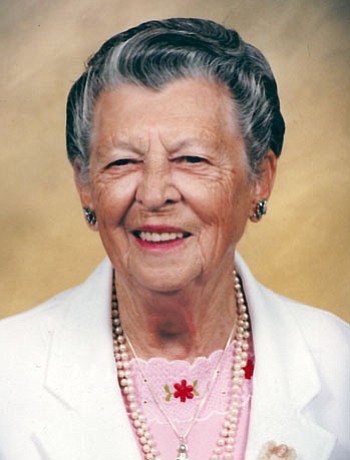 She was born in Effington Township, Ottertail County, Minn. She lived in Minnesota for 54 years and moved to Kingman in 1967. Girlie operated three restaurants, two in Minnesota and one in Kingman. She was also a cook in several other restaurants in Kingman. Later, she became the owner of a small bakery where she baked and decorated cakes and made all kinds of goodies. Girlie was known as the "cake lady" of Kingman.

Girlie was a woman of many talents. She had a certified college diploma to service and repair small motors and electric appliances. She was a lifetime member of the D. A. V. and a member of St. Mary's Catholic Church, where she served as a greeter, eucharistic minister, member of the choir, and member of the marriage encounter group. Girlie was a bowler and an inspiration to many as she participated in league bowling well into her mid-90s.

She was preceded in death by her first husband, Maynard F. Slavik of Kingman; two brothers, Urban Woida and Lawrence Woida, both of Minnesota; and one great granddaughter of Phoenix.

Viewing will be held at Desert View Funeral Chapel on Friday, May 22, from 5 to 7 p.m. with rosary at 6 p.m. Funeral services are scheduled for 10 a.m. Saturday, May 23 in St. Mary's Catholic Church. Rev. Father Matthews will officiate. Interment will follow in the Chloride Cemetery. The Belles of St. Mary's will be hosting a celebration of life following the interment at St. Mary's Hall in Kingman.