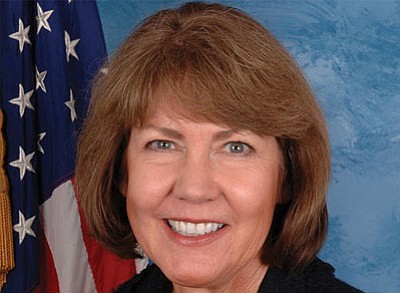 Kirkpatrick, 65, is serving her third House term in a district she has won narrowly. She was already being targeted by Republicans for what was expected to be her House re-election bid in 2016.

McCain was his party's unsuccessful 2008 presidential candidate, losing to Barack Obama. A Navy flier who was held prisoner during the Vietnam War, McCain, 78, has long been one of his party's most influential voices on military and foreign policy issues and is chairman of the Senate Armed Services Committee.

"I respect John McCain's service to our nation," Kirkpatrick said in a video her campaign released. "I just believe our state's changing."

The former prosecutor's video also emphasized her roots in the state, including pictures of boots she says she purchased with tips from waitressing.

"I'm not naive," she says. "I know that Washington insiders are already trying to dig up dirt. But having grown up here, a little mud on my boots is part of life."

McCain announced his intention to seek re-election in April, when he said in a prepared statement, "There is so much worth fighting for today."

"Ann Kirkpatrick has been part of the problem in Washington and Arizonans are paying the price," Bozek said.

Redistricting push may be behind Kirkpatrick's Senate bid
McCain, Kirkpatrick debate tonight
Kirkpatrick: Jobs No. 1 priority
Poll: Shots at McCain not helping Ward
Polls show Senate race could be a difficult one for McCain
Event Calendar