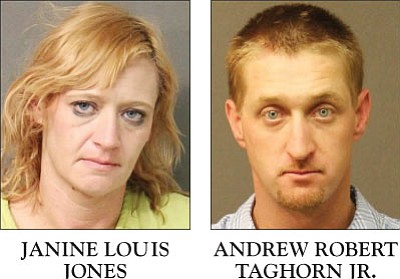 Officers were en route to the store on Stockton Hill Road regarding a shoplifting call when a dispatcher informed them the suspect left the store in a car without paying for items, and that the car's license plate had been covered.

Police located the car, conducted a traffic stop and took Taghon and Jones into custody.

The investigation allegedly revealed Jones purchased some items but concealed other items in a jacket, and that Taghon purposely covered up the license plate.

Police found much more when they searched the car and allegedly found chemicals and equipment used in the manufacture of methamphetamine. A hazardous materials team from the Arizona Department of Public Safety and DPS crime lab personnel responded, as did detectives with the Mohave Area General Narcotics Enforcement Team.

A misdemeanor shoplifting charge turned much worse for Jones, who was also charged with felony possession of chemicals and equipment for the manufacture of dangerous drugs. Taghon faces the same charge, along with felony counts of possession of drug paraphernalia and hindering prosecution.