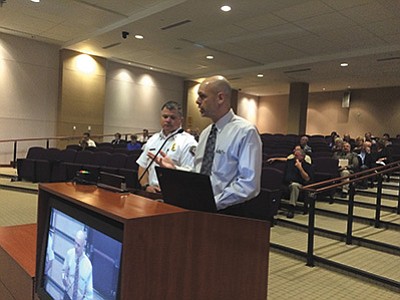 KINGMAN - Lake Mohave Ranchos Fire District has yet to pay off a $250,000 debt to Mohave County, which means it is not financially solvent as administrator John Flynn has indicated, Supervisor Buster Johnson said Monday.

Mohave County Board of Supervisors heard a presentation from Flynn on the fire district's status after it was rejected for consolidation by Northern Arizona Consolidated Fire District.

Supervisor Jean Bishop requested that an item be placed on a future board agenda for action regarding an election of five members to the Lake Mohave Ranchos Fire District.

That election would be held May 17, coinciding with a vote on the governor's education funding, Flynn said.

In earlier reports to the board, Flynn said Lake Mohave Ranchos Fire District has attained financial solvency by paying off a $700,000 revolving line of credit with Wells Fargo Bank. The district is spending about $70,000 a month, or $850,000 a year, to provide service to rural areas of Dolan Springs, Meadview and White Hills, he said.

But Johnson brought up the county debt and wondered how financially solvent the fire district can be when it keeps coming back to the county for funding.

"If the books were even, we shouldn't be looking to bail them out in February," he said.

Flynn said there's a substantial amount of unpaid taxes to the district, and that the county debt is a "technical aspect" of an agreement with the county and Wells Fargo. It's a "process issue," he said.

"We've been accumulating cash in the non-tax account, about a quarter-million dollars," he said. "My understanding is we have registered warrants, and we'd use cash on hand to offset that. As the second round of taxes come in April, we'll be back on track."

Revenues are meeting expenditures, but Lake Mohave Ranchos Fire District must rely on a "backstop" with Wells Fargo's revolving line of credit or the county until all the taxes come in, Flynn said.

Supervisor Bishop asked about the chances that the line of credit may not be approved by Wells Fargo.

"Yes, that's always a possibility," Flynn responded. "Then I would need to dial back on expenses and staff to get past the point we don't have tax funds until April or May to close out the year."

In other action from Monday's regular meeting:

• The board voted 5-0 to approve a zoning use permit for a commercial kennel on Taos Drive, between Arroyo Drive and Roundup Avenue. Kennel owner Dan Beander said the 21-acre property has been inspected by the American Kennel Club and is a "nice, clean facility."

• The board voted 5-0 to adopt amendments to the Mohave County Zoning Ordinance, except for industrial performance standards, which will undergo a 90-day study to look at noise levels.

• The board voted 5-0 to direct staff to develop request for proposals for medical examiner services. The current contract expires June 30.

• The board will review 36 applicants for the risk manager position and narrow the field of applicants to about a half-dozen for interviews.

• The board tabled action on membership in the County Supervisors Association until May. Annual membership dues are $80,000, and Supervisor Hildy Angius questioned whether the county is getting its money's worth in representation from CSA.

• The board was unable to come to an agreement on paid time-off accrual, carryover and severance payout policies for new and existing employees.

• The board voted 5-0 to approve a 195-foot wireless communications tower and three 1,000-gallon fuel tanks in the Silverado vicinity, after a representative from the company made assurances about noise, fuel spill containment and emergency responders in case of fire.