End of Vietnam War is the theme at Kingman veterans parade 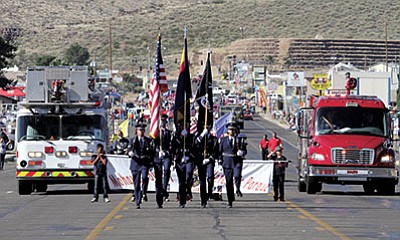 KINGMAN - The Veterans Day Parade begins at 10 a.m. Saturday on Beale Street in downtown Kingman, proceeding from Sixth Street to First Street and ending at Locomotive Park, where the celebration will continue in the park until 5 p.m.

More than 50 registered entries will begin lining up for the parade at 7 a.m. Grand marshals are World War II veterans Charlie Hupp and Vince Lombardi.

The theme for this year's parade is the 40th anniversary of the end to the Vietnam War, and Vietnam Veterans of America Chapter 975 will have three vehicles in the parade, including one with a trailer.

Military veterans will also come from VFW and American Legion posts in Kingman and Golden Valley.

"We're just trying to bring back patriotism and get kids to know about the forming of our country," said Dave Stafford, chairman of Kingman Veterans Parade Committee. "A lot of kids have no clue. We're trying to build enthusiasm and get family participation in revitalizing our history."

Stafford said the committee made "great strides" in taking the parade from its former route on Northern Avenue to downtown Kingman, and hopes to make this parade one of the best in Kingman history.

Retired Vietnam War veteran Vince Correa of VFW Post 3516 will sing the National Anthem and the Patriot Guard Riders will present a flag line at the park event. There will be sack races, horseshoes and other games for children, food and crafts vendors and drawings for quilts and gift baskets.

Veterans Day is Nov. 11 and more activities are planned for Kingman, including an 11 a.m. memorial ceremony by American Legion Post 14 at the cemetery and a 2 p.m. parade at the Lingenfelter Center and The Gardens Center.