Golden Valley's Eutsey was in fierce fighting at Iwo Jima 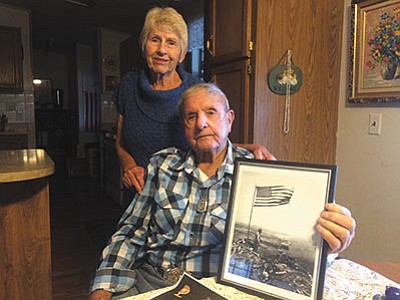 Al Eutsey and his wife, Sandy, with a photo of the first American flag raised over Iwo Jima in February 1945. (HUBBLE RAY SMITH/Miner)

GOLDEN VALLEY - It was February 1945, somewhere near Hill 362A on the island of Iwo Jima, when U.S. Marine Corps Sgt. Al Eutsey earned his Purple Heart medal in one of the bloodiest and most famous battles of World War II.

He was crawling up the hill with Company C's Combat Team 28 to take Mount Suribachi when a mortar exploded next to him. A fragment cut the thick strap of his backpack and entered the left side of his chest.

Eutsey was numb and blinded and his head was ringing. He was bleeding profusely from shrapnel wounds. Corpsman Keith Hawkins, who would be killed in battle the next day, stuffed gauze into the hole in his chest and put him on a stretcher to be carried out.

"I was on the first assault wave," Eutsey recalled at his home abutting wilderness cliffs on the western edge of Golden Valley. "There were heavy guns down at the beaches. I thought, 'Dear God, help me through this and I'll be a good boy for the rest of my life.'"

"And he tried," added Eutsey's wife, Sandy. "He did the best he could."

Eutsey, 91, was part of the legendary Marine Corps division that took the mountain and raised the first American flag on Iwo Jima. The iconic photograph of the Marines' flag-raising came a few days later.

Of some 250 men in his unit, 67 were killed, 240 received the Purple Heart, and only six walked away physically unscathed. Company C brought in three different replacement units.

Not only did CT-28, considered the best fighting unit in Marine Corps history, raise the flag atop Mount Suribachi, it also broke through the Japanese defense at "Bloody Gorge" on the northern part of the island to wipe out an almost impregnable 200-man pocket of resistance.

Eutsey spent 11 days fighting the Japanese, who were entrenched in caves and foxholes, and he'll never forget the sacrifices of 6,800 soldiers who gave their lives to capture that 8-square-mile island.

That's what Veterans Day is all about for Eutsey.

"So you can memorialize those that departed us," he said. "We had a cemetery at the base of Suribachi and as soon as someone got killed, we'd put a stone with their tags in there. We had a board over the gate: 'We gave all of our todays for all of your tomorrows.'"

Eutsey recently returned from Washington, D.C., where he visited World War II and other war memorials on a trip sponsored by Honor Flight of Southern Nevada.

Eutsey keeps two or three boxes full of pictures, magazines, books and other historical artifacts from Iwo Jima. He's got programs from all of the Iwo Jima survivors' reunions he attended since 1952.

"We get to talking to each other and find out who was killed and who's left," he said.

It was at a reunion in Laughlin in 2001 that Eutsey found out why he'd been tossed into a ditch when he was on that stretcher being evacuated from the battlefield.

That's where he met Preston Welch from Sun City, who was one of the Marines carrying the stretcher.

"He showed me his finger. He got the tip of his finger shot off," Eutsey said. "I wondered why they dropped me. Hawkins saved my life, kept me from bleeding to death, and now the Japs opened up fire on the stretcher bearers. First thing I knew I was dropped in the ditch as the team ran for cover. They were dropping shells on the Jeep the stretcher was in."

Eutsey spent about five or six months in hospitals in Guam, San Francisco and Seattle, and then went to New Jersey for rehabilitation. By then, the war had ended and he was discharged on Oct. 18, 1945.

Capturing Iwo Jima was key to defeating the Japanese Imperial Army and ending World War II. The American amphibious invasion of Iwo Jima stemmed from the need for a base near the Japanese coast.

Eutsey returned to Iwo Jima three years ago to trace his footsteps with a group of history students and professors from University of Ohio, which paid for his trip.

"I don't think enough of it is put into American history," he said. "They probably know more about John Paul Jones than (Dwight) Ike Eisenhower."

The 34th president of the United States was a five-star general in World War II and supreme commander of Allied Forces in Europe.

Eutsey flies the U.S. flag above a flag commemorating the battle of Iwo Jima at his Golden Valley home.

Lion of a man

Abraham "Al" Eutsey was born on a self-contained farm in White, Pa., one of nine brothers and sisters.

He served five months in Puget Sound and trained in San Diego and Alaska, and in 1944 his battalion was disbanded and formed into the U.S. Marines 5th Division.

"One thing I didn't like was I joined in 1942 and didn't get to go home until the end of 1943," Eutsey said. "We had no phones, no radio. We had an office phone to call home for five minutes on holidays.

"All of our mail was censored and they'd cut little slices out with a razor blade. My mother showed me. We got two weeks liberty at home and didn't have any air transportation. I had to use most of the time for travel from California to Pennsylvania," he said.

One of his captains, Fred Haynes, who eventually rose to the rank of major general, wrote a book, "Lions of Iwo Jima," about CT-28 and the bloodiest battle in Marine history.

Eutsey has a picture of the team's mascot, Roscoe the Lion, on the front of a Jeep with the Marines around him. Roscoe was purchased for $25 in Hollywood, Calif., and was smuggled to Hawaii.

After the war, Eutsey worked in the automobile and recreational vehicle business for about 40 years in Southern California. He and Sandy have been married 35 years and have lived in Golden Valley for 20 years.

"Once a Marine, always a Marine," Sandy said. "His old Marine buddies are almost like kids, or brothers. They have so much in common."