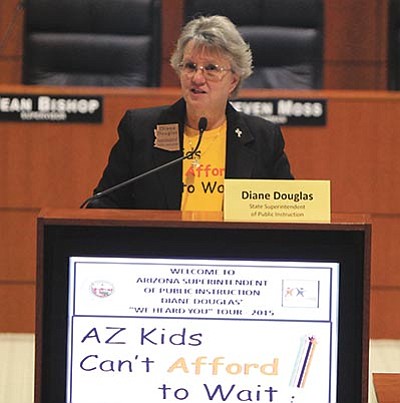 While the 20 or so people who came to listen to Arizona Department of Education Superintendent Diane Douglas barely filled the aisle seats at the Mohave County Board of Supervisors auditorium Tuesday, the presentation and discussion led by Douglas addressed concerns held by both citizens and teachers.

Douglas came to Kingman as part of her "We Heard You Tour," which is part of a statewide tour that wraps up this week in Tucson. The tour features her "AZ Kids Can't Afford to Wait" plan, a collection of proposals drafted from concerns heard from around the state.

The 156-page plan is a work in progress, and the superintendent and her staff were adamant in saying that this plan is not policy or law, but a roadmap in need of public input.

"If nothing else, it'll get a robust dialogue talking about education and the direction we are going in Arizona," said Douglas. "Common Core is a major change in our education in this country. We did it without public input or debates. I decided as an elected official to do something different."

She anticipates doing these kind of tours twice a year throughout Arizona.

The plan was constructed from feedback she received from communities around the state in the spring. The proposals in the plan span many facets of the Arizona education system and vary in how much change they bring.

Douglas was candid in saying that covering all her proposals in a one-hour discussion wasn't possible. And, while her presentation portion focused on teacher, student and parent support, the discussion centered on teachers and testing standards.

At the forefront of her discussion on teachers was getting support to teachers who need it the most.

"We lose 40 percent of our new teachers in the first two years," said Douglas. She said that Arizona's teachers are stressed out due to factors both in and out of the classroom.

"We have young kids, college graduates that aren't sure what they're getting into. It's stressful," she said. "We recognize that there are stresses that have nothing to do with the job that we're doing. We want to help them deal with it. I wouldn't mandate, but make suggestions."

"We've put a lot more testing demands on them," said Douglas. "Our testing used to be an achievement of a child. Now it's high stakes in many other ways. When it comes time to renew my contract, will it depend on those tests?"

Douglas and her staff also recognized that salaries and classroom funding were low, and they were part of the state legislative push to bring money from the state land trust and put it toward teacher pay.

"Without a doubt, that's what I heard loudest and clearest around the state. Arizonans want their teachers paid better and classroom sizes reduced," said Douglas.

Douglas has consistently spoken against Arizona's adoption of Common Core standards, and she addressed her concerns with those standards Tuesday.

"No bones about it, I ran very strongly against Common Core standards," she said. "We call them college and career ready standards, but we know there are deficits in those standards. The people who wrote them wrote them as community college standards. That's not university ready, if you want them ready. There's no trigonometry. No calculus."

Arizona opted into the Common Core standards well before Douglas took office, and the state adopted the AZMerit test last November to replace AIMS as the standardized test for students in Arizona. The first round of AZMerit scores are set to go to parents some time in November.

Clare Schroeder, a teacher at Kingman High School, expressed her concerns over getting rid of Arizona's current standards without a "soft roll-out" to students and teachers who have adjusted to meet current standards.

Douglas clarified her position if the state decides to implement new standards and testing in the future.

"It would be unfair to our teachers and students to pull Common Core," said Douglas. "There's a standards review process the board of education has agreed to. When it comes to Common Core, they haven't allowed us to use that process. They created a new process in April, but we have not been given the ability to review a standard.

"The important part is to create higher standards, ones that go through a regular review process. They should never be static."

Douglas also addressed the issues with the AZMerit test, which was hastily implemented after Arizona had to change tests four months before testing.

The vendor writing the AZMerit test, the Washington, D.C.-based American Institutes for Research, holds the contract for three years. The vendor is required to test to Arizona's standards, and Douglas affirmed that "if we change our standard, they have to fix the test."

Golden Valley citizen Steve Robinson brought up his concerns over Synergy, and the use of data mining at the state level. When he asked the superintendent about her thoughts on the subject, she emphasized that it is more of a local district issue than a state issue.

"We're more of a repository," she said, saying that data from the districts are reported to the state, and that the state restricts what goes to the federal level.

She also went into depth on the department's view on personally identifiable information, or PII.

"The department defines PII to a much stricter standard," she said. "When I think of PII, I think of names, addresses, Social Security numbers. In the department, we don't define PII like that. I was delighted to learn we define it to a higher level.

"As long as I hold the office, we will make sure the data is used in the student's best interest."