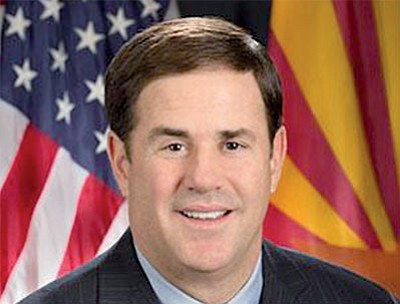 PHOENIX (AP) - Arizona Gov. Doug Ducey said Monday he wants the Legislature to approve "tens of millions of dollars" in new funding for a border security force made up of state police, a move intended to address border smuggling even as immigration and terrorism worries emerge as potent 2016 political issues.

The Republican governor said his new plan to target smuggling along the Arizona border will focus on adding staffing, technology, air assets and highway patrol coverage.

The troops, equipment and added staffing will be used by a newly formed Arizona Department of Public Safety unit called the Border Strike Force. Since he created it in September, the unit has seized more than $2.2 million in cash, multiple firearms, nearly 4,000 pounds of marijuana, 73 pounds of meth, and 19 pounds of heroin - "more [heroin] than the entire amount seized in all of 2014," by state police, Ducey said.

Ducey highlighted the new efforts after testifying at a field hearing of the U.S. Senate Homeland Security and Governmental Affairs Committee at the state Capitol.

Johnson said the root cause of the smuggling issue along the border is "America's insatiable demand for drugs."

McCain noted that while the Border Patrol has made substantial progress, the smuggling of drugs and people continues to be a major issue.

"We've made progress in securing our border, there's no doubt about that," McCain said. "But clearly we are losing the war with the transnational criminal organizations that smuggle illicit narcotics into our country. The demand for these drugs - heroin, meth, cocaine - is too high, and the profit the cartels make too great to simply arrest our way out of this problem."

The Arizona effort pales in comparison to what is happening in Texas, where new Republican Gov. Greg Abbott championed an $800 million, two-year border security proposal through the Legislature in June.