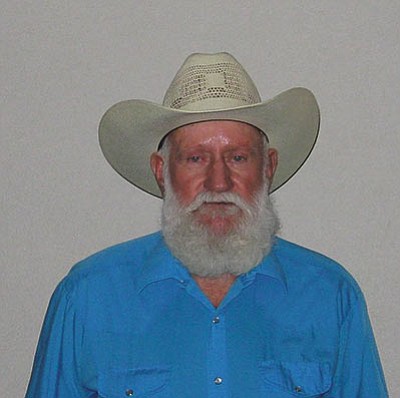 Frank was born on Aug. 29, 1935, in Tucumcari, N.M., to Frank Oliver and Nanny Lee Wood. Frank served in the U.S. Army. He was a member of the Carpenter's Union for over 40 years and worked at Duval Mine for approximately nine years before the mine shut down in 1980, at which time he transferred to Battle Mt., Nev.

Frank and Sue moved to Golden Valley in 1963 where they raised their three children, Sharon Meisch (Dave) of Kingman, George Wood of Flagstaff and Leroy Wood (Bobbie) of Golden Valley.

Frank's passion was always his animals and everyone knew him best as a farmer. He spent most of his time taking care of his "menagerie," as he humorously referred to his little two-acre farm.

Frank grew up hunting with his family and passed the love of the sport on to his children and grandchildren. Most family stories begin with or end with "at deer camp."

Frank is survived by his wife and children; brother Bobby Wood (Jeane) of Wilmington, Ohio; sister Jo Beth Hayes (Jerry) of Sahurita, Ariz.; his five grandchildren, Teddy and Jessy Harms, Cody, Chad and Hailey Wood; as well as numerous nieces and nephews. He was preceded in death by his parents, brother Herby Oldham and grandson Casey Wood.

Frank was a devoted husband and father. He was a kind and generous man who had many friends and always helped them when they were in need. He was loved by all and will be deeply missed.