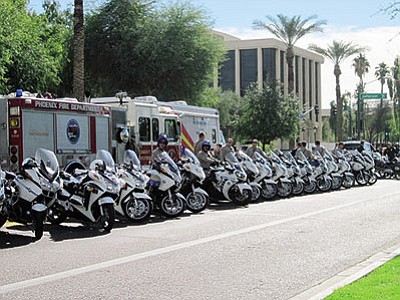 Law enforcement in Arizona and all along Interstate 40 will be on extra patrols over the holiday weekend, looking for impaired or dangerous drivers. (Courtesy)

KINGMAN - Law enforcement will be out in force over the holiday weekend, starting with "Wild Turkey Wednesday."

The Kingman Police Department - and the multi-agency Western Arizona DUI Task Force - will provide enhanced DUI enforcement paid for with a grant from the Arizona Governor's Office of Highway Safety.

That means officers will be on the street for one reason: Finding impaired drivers.

Last Thanksgiving weekend the 14 DUI task forces around the state made 358 misdemeanor and 44 felony DUI arrests, according to Kingman Police spokeswoman Jennifer Sochocki. The average blood alcohol content was 0.153 percent. More than 10,400 motorists were stopped over the weekend.

Sochocki encouraged the use of designated drivers or urged revelers to take advantage of discounted rates many taxi companies offer during the holiday season.

"Arizona has the toughest DUI laws in the country," said Sochoki. "The average first-time DUI violator can expect fines and fees to exceed $10,000, which would include the installation of an interlock device on their personal vehicle."

State officials don't want a repeat of the death toll from last year's Thanksgiving weekend and are urging motorists to be patient while traveling.

The Arizona Department of Transportation said last year's Thanksgiving weekend was the deadliest in the past decade, with 18 people killed in crashes on state highways and local roads. Of those killed, six died in crashes involving impaired drivers.

ADOT, the Arizona Department of Public Safety and the Governor's Office of Highway Safety urged drivers to buckle up and avoid distractions, especially texting while driving, and to not speed.

ADOT says it's not scheduling any construction-related closures over the holiday weekend and that motorists will see messages on electronic signs about slowing down and driving sober.

The Arizona Department of Public Safety said its effort includes increasing patrols along I-40 during busy 12-hour periods on Wednesday and Sunday.

The Associated Press contributed to this report.