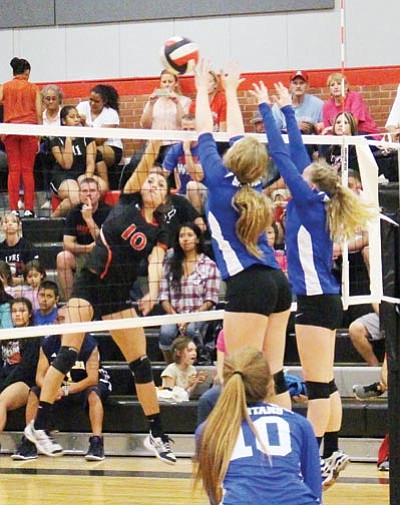 "I think it was rough, and the girls knew it, too," said LWHS volleyball coach Traci Rosenbach. "But they were fighting. They were trying, and they didn't give up. I'm proud of them for not giving up."

The Lady Vols jumped out to an early 5-0 lead in Game 1 and maintained a five-point lead at 10-5. Lee Williams' back row began to have its issues defensively with digging and serve-receiving, which allowed the Spartans back in the set.

The errors continued to mount in Game 2 as Northland built a nine-point lead, 22-13. Behind the serving of sophomore Mia Santos (15-for-15), Lee Williams battled back to win six consecutive points and close the gap to three, 22-19. Once the Spartans got the serve back, however, they held it until they won the second set.

Northland's aggressiveness and power continued in Game 3, and the Spartans pulled away after the two teams were tied at 5-5. Three of Northland's last five points came as a direct result of Lady Vols errors, including the match winner on a net violation.

"We are very young," Rosenbach said. "I think we can be a Northland if we fine-tune our game. I thought Northland's defense, blocking and back row play was outstanding. Our defense is like that at times, but not tonight."

Setter Sadie Snay led Lee Williams with six kills and five assists. Khori Cobanovich had 18 digs, but the Lady Vols as a team made 11 digging errors and 27 errors serve-receiving.

Rosenbach has yet to come up with an answer for the absence of sophomore Tori Hummel-Logan, who went down with a meniscus tear Sept. 19 and appears to be lost for the season. Hummel-Logan was drastically improving her skills and was an anchor on the back row.

"I may need to pull up more girls (from JV)," Rosenbach said. "I really like Kaylee (Bond)."

Bond, a freshman, played the last few points in Tuesday's match, and Rosenbach may bring her up to varsity on a full-time basis if she can help the back row.

Lee Williams plays at Kingman (0-7) at 6 p.m. today in the season's first meeting between the two teams. The Lady Bulldogs fell to Bradshaw Mountain Tuesday, 3-1.