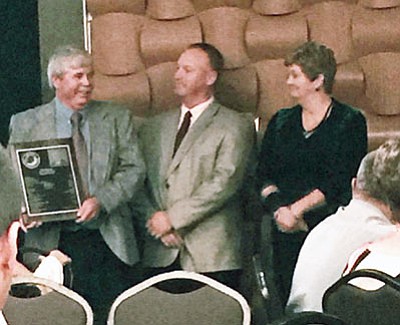 The best part about sports writing is I get to tell the stories of people's accomplishments. Whether a team wins or loses, the coaches and players involved accomplished something. And sometimes, they accomplish something really special.

The Arizona Interscholastic Athletic Administrators Association states it created the AIAAA Hall of Fame "to honor all those athletic administrators who had contributed so much to the state of Arizona. Their exceptional contributions by providing guidance and support of interscholastic athletics to coaches, athletes and communities has helped create a state rich in high school athletic tradition."

Last month at the AIAAA's annual conference in Prescott, the organization inducted Tim Casson into the hall. Casson was the athletic director at Kingman High from 1998 until he retired in 2013 and began as a teacher and coach at KHS in 1977.

"It was awesome," Casson said. "It was completely unexpected. I watched all those years as a member, and year after year I watch different members get inducted. I never expected it for me. It is special to be chosen by my peers, the people I worked with over the years."

Casson spent a considerable amount of his time serving on different committees for the Arizona Interscholastic Association during his tenure at KHS. He became well known in the AIA circles because of that. Tim Casson deserves his newly found status, but he warrants the accolade not just for being on committees but because of what he did for people. Mostly, he taught others about taking care of people.

When Casson retired, John Venenga took over his post as KHS athletic director. It's because of Casson you can find Venenga at every road football game the Bulldogs play.

"The best thing Tim gave me was the importance of attending away football games for our school," Venenga said. "I've been able to help students and parents when kids got injured (away from home). That makes things better by being there for them."

Anne Bathauer has coached KHS cross country the past 22 years, and her appreciation for Casson runs deep. Casson coached and mentored her late husband, John, when he attended KHS and played for Casson in the 1980s.

"Tim was one of those people who was a father figure to John during baseball season," Bathauer said. "He was a huge mentor and would help me with anything I needed."

"Tim has been valuable beyond words," said KAHS assistant to the athletic director Mike Bradley. "He's made sure we were in compliance with everything for the kids. We'd be so messed up right now if he hadn't been there to hold our hands."

People are front and center for Tim Casson. He's a Hall of Famer now, justifiably so, and that is a tremendous honor. But hopefully he's more honored by the way he influenced people.

I don't think anyone could have said it better than Anne Bathauer.